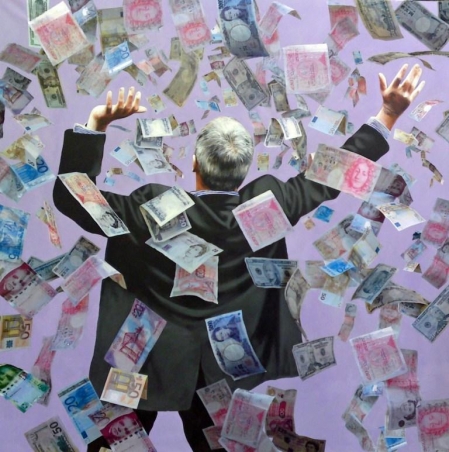 I have found this second inspiration piece to be a real challenge. My friend Elisabeth chose this quirky and challenging painting by Scottish artist Gerard Burns. I didn’t know anything about Burns, but have since learned that one of his paintings hangs in the First Ministers office in Holyrood. (Scottish Government). When I look through Burn’s work, I am struck by how realistic his brushwork is. His paintings are disturbingly real, causing you to check whether there is a photographic element to them. That’s not the only disturbing thing, he mixes a sense of the fantastic and dramatic with people who you feel familiar with. A child, who looks ordinary, familiar, stands with two enormous wolves in one, in another a girl walks in a familiar, perhaps Glaswegian post-industrial landscape with a menagerie of creatures, including two doves accompanying her. I find his work brilliant and challenging, mixing the ordinary with the dramatic and the wonderful; as though he challenges us to see the same in what’s around us.

He isn’t beyond some humorous and wry comment either. The piece that Elisabeth chose seems an amusing metaphor for me, and in a time of such instability and fear in the financial and economic world, this seems an appropriate painting. For me the businessman is reeling backwards under the inexorable pressure of the money swirling around him, doing what money does, oblivious to his attempts to control the environment. It could depict the moment he realises that he isn’t in control. For those who are interested in chaos theory, markets may exhibit chaotic behaviours when the predictable and smooth patterns of economic transactions suddenly break down and become an unpredictable storm. In other words, it may be impossible to ever truly be in control of economies!

The almost photorealistic quality made me wonder whether I could try something similar, although the sheer quantity of cash swirling around meant that I couldn’t envisage technically (or financially) how I could reproduce it. I settled on a more modest collage in which I photographed a “businessman” my ever obliging friend Martin, reeling under the onslaught in his battle with the financial flow. The bananas are just my way of making clear it’s a joke and a metaphor; the man is in a fight without any useful tools. Does he himself understand this?  I photographed the falling money separately but on the same background using flash and the highest shutter sync speed available, 1/250th on the 40D. I have recorded here before how little I love using photoshop, but using the layers functions, I built up the “cash flow” over Martin, trying to get a sense of the notes flying towards and around him. One of the reasons for starting this new “26 artists” project is to learn, here I have learned about a brilliant artist, and as a bonus I have moved out of my comfort zone a little with photoshop and developed those skills a little. I hope you like the result, which I have titled “Cash Flow” in homage to Burn’s own shocking pun title of “Prophet and Loss”: 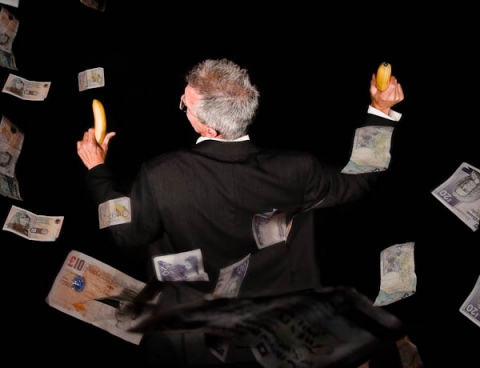 And so to C. Watch this space.