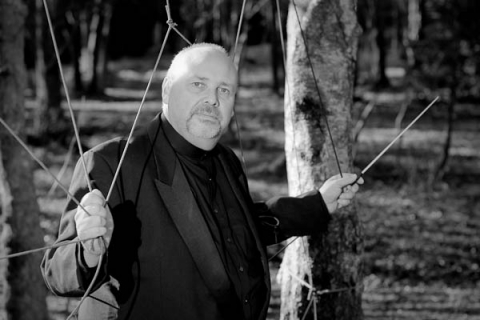 This terribly striking and handsome man is my colleague and friend John Grant. John is a musician and specialises in conducting. John as a conductor is something to see; he basically knows how to get the best out of people and everyone loves working with him. This picture was snatched in 15 minutes from a rehearsal for the Argyll Concert Band which John was organising. The setting was the Ardentinny outdoor centre in Argyll and the backdrop is a play-spiderweb in their grounds.

Photographically, the sunlight was very directional and strong. I wanted to get some drama from the backdrop so shot with the sun behind John and handheld my flash with no softeners as a much needed fill-in. I did a black and white conversion as the shapes are the strength of this picture and the greenery distracts the eye too much. I have a theory about greenery in pictures; it is easier to focus attention on a subject using a simple backdrop. When in woods, the eye seems to scan the scene. Apparently the eye is more sensitive to green. I also wonder whether we have evolved to be more vigilant about woods since they were sources of food and of danger in our hunter-gatherer past. Give me a factory wall every time, but in this case, woods were what I had!