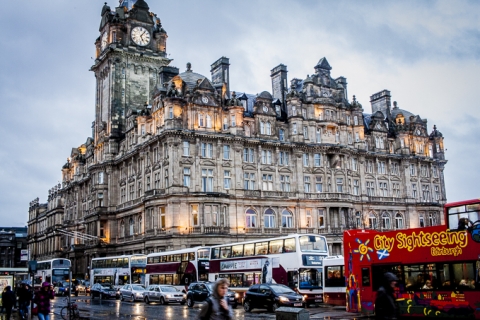 I was lucky to get this one sharp at all. It was dark and very rainy as well as getting into twilight. (The clock confirms this of course!). I selected ISO 1600 and only got 1/20th of a second using f10. I adjusted ISO up for my next few shots but luckily this one worked anyway, perhaps as I was leaning against a shop window and hopefully using decent technique in not jarring the shutter as I clicked.

The rule of thumb is don’t use a shutter speed less than 1 divided by the focal length lens you are using. (This is complicated by the fact that many of us use crop sensor cameras such that my 24mm lens here is actually acting as roughly a 40mm lens) I therefore really needed a speed of roughly 1/40th of a second, so I only had half the speed I needed.

I have wondered this before, but if a moan is a good one, it is always worth repeating! My camera body knows the focal length of the lens that is on it, it indeed encapsulates this info in the EXIF data it bakes into the image, it knows I have a half-depressed shutter to lock focus, couldn’t it throw up a camera shake warning in the viewfinder? You’re welcome Mr Canon!

What is interesting about photographing townscapes at this time is a feature called “crossover light”. The lights on the building itself are roughly the same brightness as the sky, this feature of a townscape usually lasts for about half an hour and most photographers adore it; I know I do.

The actual way to take these pictures would have been with a tripod, and a remote shutter to ensure a really solid, no-shake platform, but Princes street at that time on a Saturday would have constituted reckless behaviour. It would have been a trip hazard on such a busy street, with wet miserable pedestrians who might not be paying attention. Anyway, this is academic, I was going to a social event, not carrying a tripod. It is only because my Canon pancake lenses are so itty-bitty that I had a DSLR with me at all.