Today while walking with friends near Tobermory on the Isle of Mull, I took this picture of the Tobermory Lighthouse. It was interesting as sunset was approaching and the light would only strike the lighthouse directly in the morning. Behind me there were steep hills that ensured the lighthouse had no exciting light. This was made even more difficult as the light was hitting the distant Ardnamurchan peninsula and emphasising the contrast between the foreground and the background. I still liked the angle on the lighthouse and the background was nice so I fell back on the last refuge of a photographic scoundrel – HDR!

For those who care, High Dynamic Rnge photography lets you combine more than one picture with an exposure taken for the foreground to add life and light to it as well as exposures for the background to optimise the sky. My favourite software to do this is “Photomatix” although I believe Photoship does it as well. Anyway, the result is a nice and even lighting, even if it is an artificial look. Still, “needs must when the devil vomits in your kettle.”

From a Mull tourism site: The lighthouse, Rubha nan Gall (the gaelic for Stranger’s Point), was built in 1857 by the grandfather of Robert Louis Stevenson and became automated in 1960. It flashes every three seconds, can be seen for 15 miles and marks the end of the Sound of Mull. 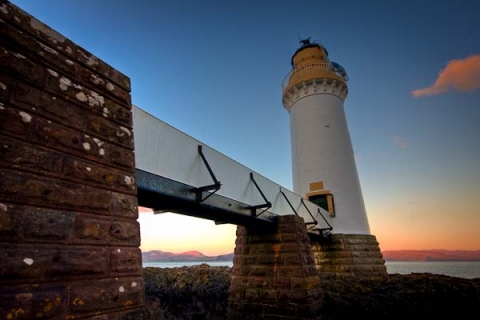 And here is a view the honest way of the entrance to Tobermory bay. Again the light was coming the wrong way to give a warm winter sunset, it was slightly in shadow, so I put on my trusty 70-300 IS f4-5.6 and picked out a detail of the island at the entrance to Tobermory Bay. A friend let me use his shoulder to help with the slow speed as I wasn’t keen to go over ISO 400. I know, I should have had a tripod with me, Canon’s Image Stabilisation is impressive though! (Colour slightly warmed in Lightroom.) 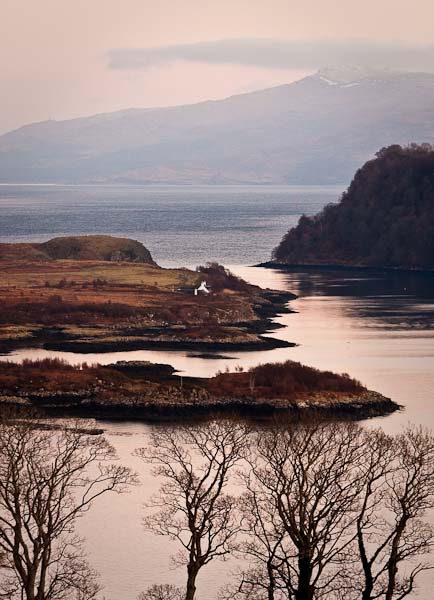