These are a few images from Edinburgh’s torchlit procession on the 29th December. The exposure was a real challenge as the light levels were so low, and the contrast between the burning torches and peoples’ faces was so large. I don’t mind admitting that the hit rate for these pictures was pretty poor. I took most of them with my 70-300 zoom, and although it is a great lens, it isn’t really a large enough aperture lens to let in the kind of light that you need to do this and to stop motion effectively. I still enjoyed capturing the atmosphere however and in fact I wish I could take more pictures like this first one; it has bags of mood, and doesn’t need good exposure on the man’s face. The rimlighting provided by the torches says more than good detail could.  (f5.6 1/80th (235 x 1.6 crop factor) ISO1600). Yay, I remembered this time that some of you like the data! 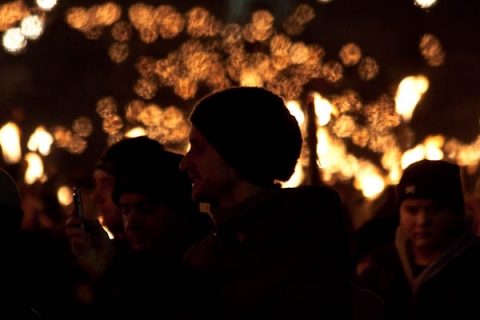 I don’t know these people, but looking down the mound and using this man’s arm as a frame for the lovely girl that he was photographing has caught a little love story in the midst of the celebrations. (f4.5 1/80th (70 x 1.6) ISO 1600) 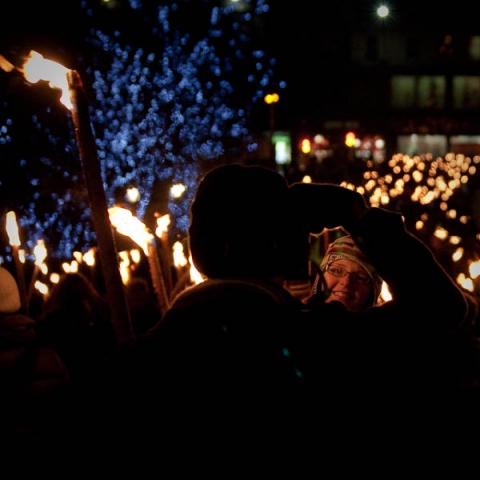 If you know me you’ll know that I love gargoyles. Odd when I have no great fondness for churches. These I consider to be their cutest features! This one was on a fairground “haunted house” ride and I couldn’t resist it in the smoky torchlit atmosphere. The zoom was fully extended and the shutter speed was glacially slow. This illustrates well the effectiveness of Canon’s image stabilisation. No way I could handhold that length of zoom at that exposure without it.  (f5.6 1/13th (300 x 1.6) ISO 1600) 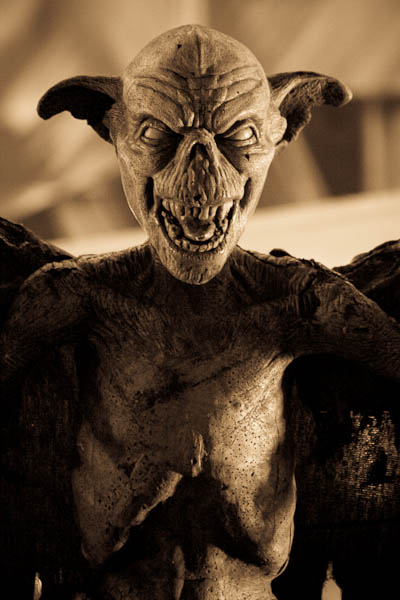 While passing the fairground rides I watched these two thrillseekers being locked into one of the scariest rides I have seen. This cage is on two massive bungee cables and on release launches the poor inhabitants of the cage at frightening acceleration into the sky. They then bounce up and down and frankly all around while the tall buildings next to them dissapear below them. This image would have been good if I had had the presence of mind to move a little to avoid the safety brace handle getting in the way of the man on the right. I knew it wasn’t right but didn’t think the picture was worth the bother. Moral of the story, listen to those nagging doubts as you photograph; so much of it is instinct. (f5 1/50th (165 x 1.6) ISO 1600) 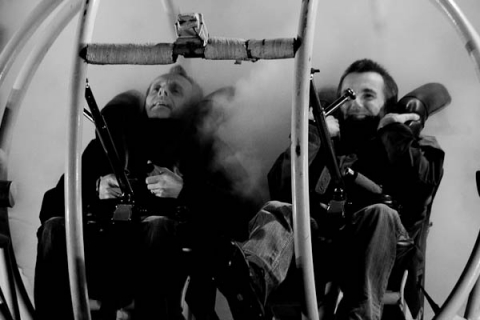 Perhaps one of them at this prelaunch moment is beginning to realise what he has let his poor stomach in for. My pants were in danger of soiling just through watching! (f5.6 1/25th (300 x 1.6) ISO 1600) 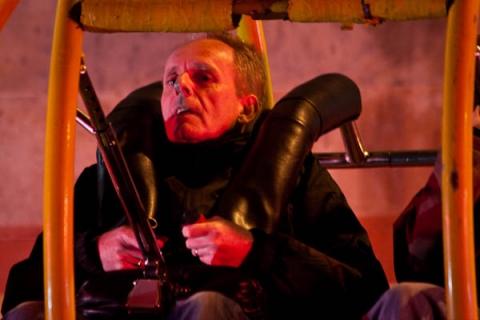 And now to the kind of ride I could just about manage as long as it doesn’t go to fast. On this particular evening it was way too cold to contemplate sitting in an open gondola. Just a simple fairground shot, but the composition pleases me. I had switched here to my 17-85 lens. It has a really annoyingly slow aperture, but again the image stabilisation is effective.  (f4.5 1/15th (24 x 1.6) ISO 1600) 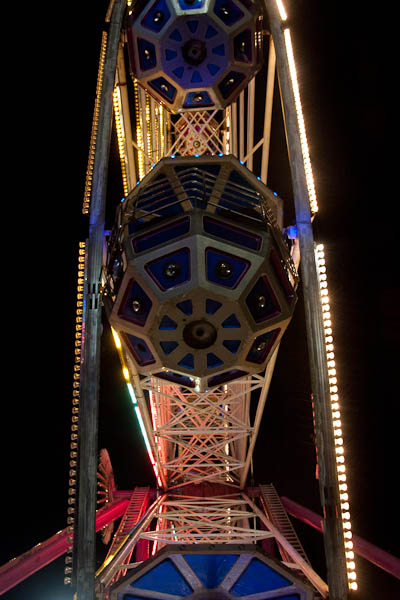 And finally, one of my favourite public monuments or pieces of public art. The Scott monument is a magnificent tribute to a damned good author and populariser of Scottish romanticism. I always think it looks like the rocketships on the covers of 1950’s sci fi novels. In close and wide to abstract the shape, a quick monochrome conversion to accentuate the shape and form and bob’s your uncle! If you want to see how good the canon IS is, note the 1/4 second shutter here, handheld!  (f4.5 1/4 sec (17 x 1.6) ISO 1600) 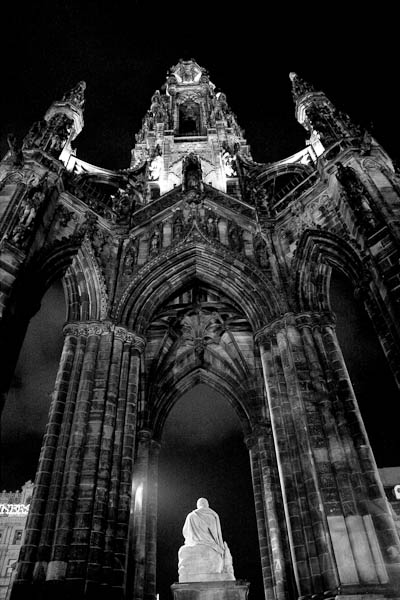