These are my friends Dick Edie and Jim Hulme. Two Lightroom exposures combined to cope with the huge dusk-dynamic range.  (Trusty sigma 28mm)

This is the mouth of Loch Sween where my friend and colleague Dick Edie lives. Dick and I share a love of photography and we both use Flickr. Truth be told, I’m not very active now but as I throttled back, Dick started using it more. The common thread is that we were both part of the mighty, Seven Days of Shooting group in which weekly themes were translated into daily challenges which really brought your photography and creativity on. Anyway, Jim Hulme from Brisbane, AU, is a leading light in that community and is visiting his relatives in England at present. Dick kindly invited Jim to his wonderful home in Achnamara in Argyll, and thoughtfully asked if I wanted to join them; I did! (Sigma 10-20) 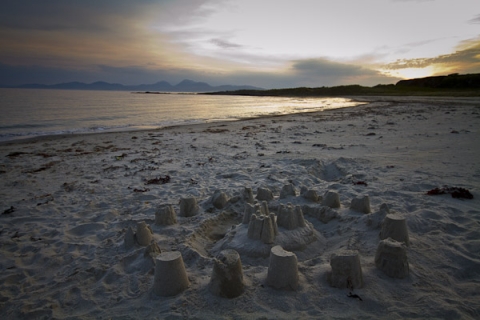 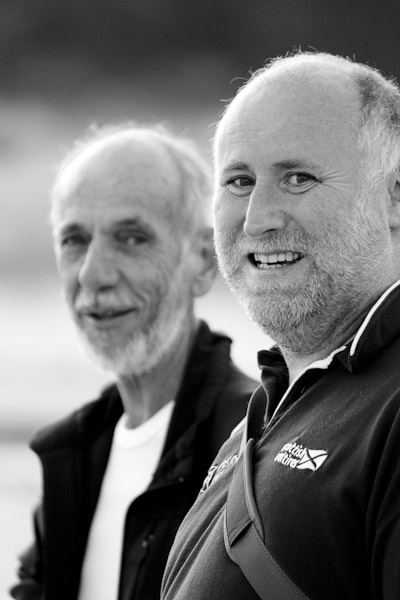 Here’s Dick, the perfect breakfast host in his “can I get you another egg” mode; the way to my heart anyway! (Sigma 28mm) 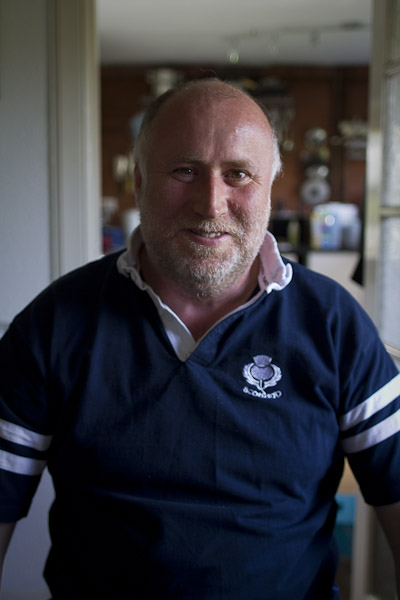 Dick took us to the Atlantic mouth of the Crinan Canal near his home. This was a puffer, (strictly a “VIC”) that Dick had photographed and I had seen travelling along Loch Fyne earlier this week. The sun was high and bright, which can be uninspiring for pictures, but the smoke from the puffer seemed to me to add interest along with the still, reflective water. (Canon 50 mm 1.4  prime)

OK, I have hung my hat on the portraiture hook, but I am so pleased with the curving harbour leading the eye to this colourfest of a boat from ullapool. (50 mm f1.4 prime) 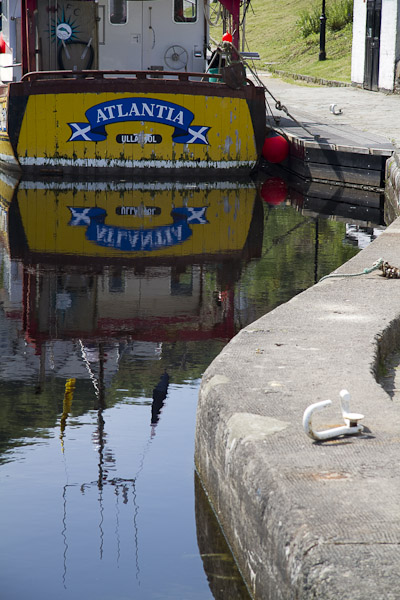 Our gorgeous and charming co-host for the visit was Jacqui; I can attest that she cooks, and bakes in a way that would make Nigella Lawson weep. Truthfully I wanted the yellow of the boat to complement the green of Jaqui’s T-Shirt, but I made the error of keeping the aperture too wide. If doing it again I would choose f5.6 or 6.3 to get a little more detail in the boat to balance the picture  as Jaqui was deliberately placed on the right of the picture thinking that the yellow stern provided balance in composition. Thankfully Jaqui’s eyes and warm expression carry the picture anyway. (Canon 50mm f1.4) 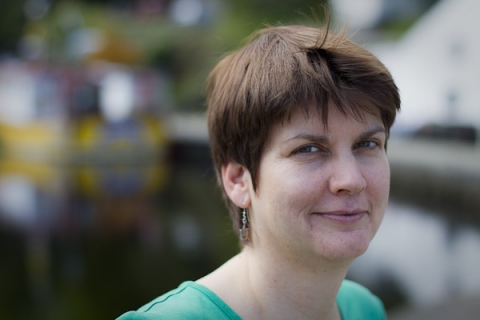 Having only spoken on Skype with this wonderful man from Queensland, meeting him in person was a real thrill. I will be sad when he returns to Oz. He is a really likeable man, with a killer mix of humour and warmth, and despite the endless modesty, a striking man too. (Canon 50mm f1.4) 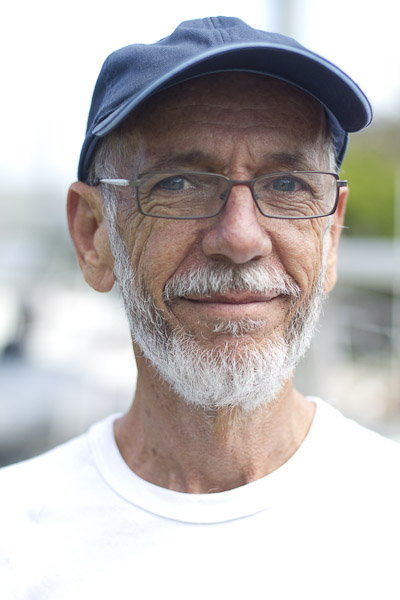 See what I mean! 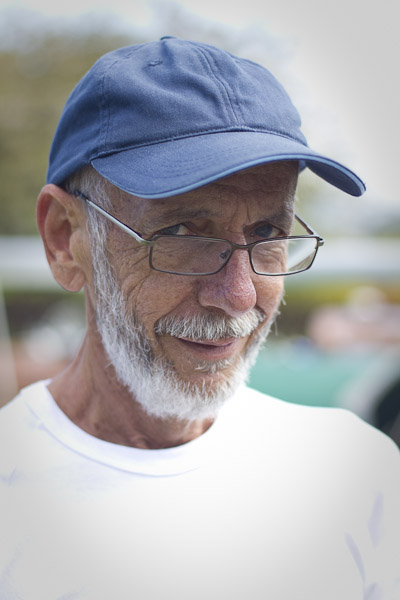 Here are the Flickr Stalwarts in their full glory, both taking sensible precautions against the uncharacteristically hot Scottish sun today. (Canon 50mm f1.4) 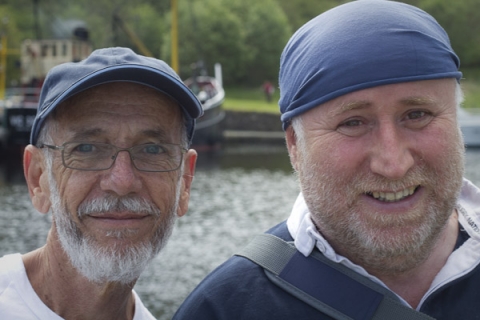 However Jim could only behave for a little while while being photographed, eventually the playfulness/ misbehaviour has to break through. If Mrs Jim is looking at this, could you slap him for me on his return please! Dick is modelling headgear by Buff TM). 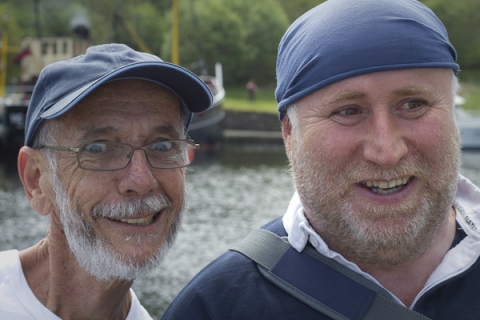 On my way home from this wonderful time in which Dick showed us Herons and Otters, I saw these disarmingly cute geese just strolling along the road as though it was their walkway. (Canon 70-300) 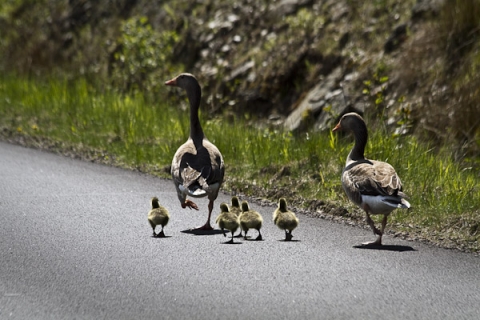 This was the self timer  picture from last night using my 7D and Dick’s tripod and automatic mode for the first time in ages. This uses fill flash and I coped with the burned out sky by combining two lightroom exposures in Photomatix to let the happy quartet be seen with some detail of the Isle of Jura in the background. 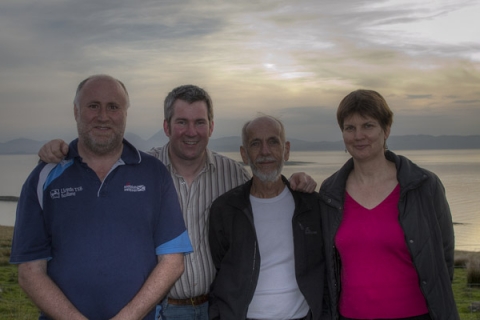