This has been an interesting week. I got hold of a Panasonic G3 Micro Four Thirds Camera, and Hannah had her first proper ice cream at Nardini’s in Largs! I am always interested in having a camera that is compact enough to carry with me but one that can still produce good images. Anyone who follows my blog will know that I dabbled with a Sony NEX 5 recently, and loved its image quality, but I sold it after a while  as it didn’t have a viewfinder. I just find as a DSLR user, that I can’t easily work on the screen at the back of a camera. There are times when I like it, like macro shots on a tripod, but for portraits, no! This camera was reduced to 159 pounds from its release price of  600 pounds or so in 2011 so I thought, “it has an electronic viewfinder, a multi-position screen, and looks like a mini DSLR; its reviews are outstanding so I thought why not try it”? It throws in my bag at about half of the weight of one of my main Canon DSLR’s, and handles really well. I only have the kit zoom lens with it, but my first impressions are good of the G3 and the smaller-than my-DSLR-but-still-bigger-than-a-compact-by-far-sensor are very favourable. The camera is serious but fun in a casual package; a proper review later!

It was in my very casual messenger bag when Julie and I took HB to Nardini’s. She is two and a half so ice-cream is the very essence of living to her. She got to pick from the very pictorial menu and the results when they arrived seemed to satisfy her. She chose something in the “chocolate marshmallow dream” line. Here she is waiting! 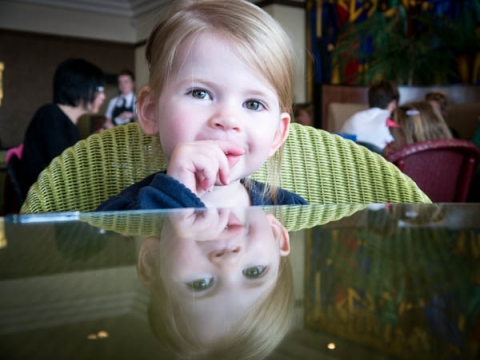 Here is the beginning of the crime scene. HB loves Charlie and Lola and for those of you who know that very magical childrens’ book series, you might recognise Lola’s sideways eyes in this picture. 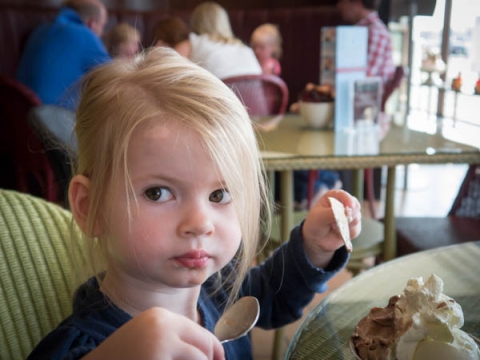 Even through the windows of Nardini’s, HB had clocked the bouncy castle on the promenade. It turned out that there were multiple sources of toddlertainment and parental nausea. Mum, who has the maniacal love of the species and sadly major-league travel sickness, still sacrificed personal comfort to accompany HB on the rides. Check the sheer happiness of that wee girl on the teacups with mum! The bizarrely wielded paper is the  receipt for our Nardini’s visit which HB decided was the-most-important-possesion-of-her-life for no fathomable reason. Parents of two year olds will recognise the syndrome:-) 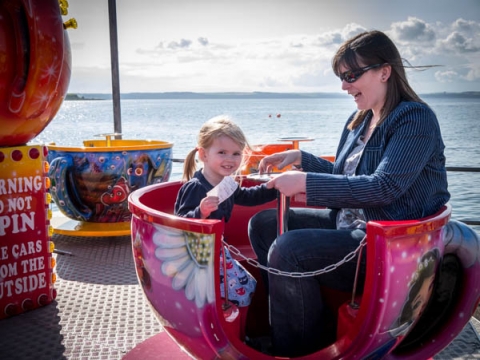 The ‘beach buggy’ ride which stripped Julie of all dignity and moved her to the suburbs of barfville! Greater love hath-no-mum. HB delighted, or “chuffdles” as we like to say. 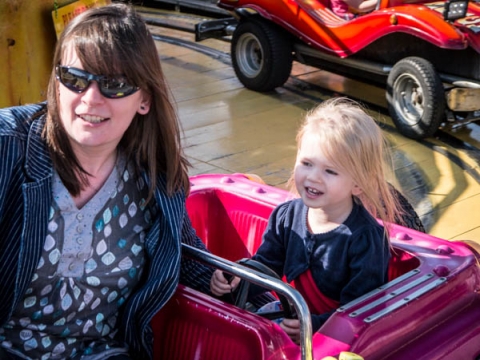 The rides are over and the final treat of the day begins for HB. Mum recently bought her a scooter, and we thought this would be a great chance for her to have her first shot of it. HB has shown no facility for physical activity so far, and generally tumbles on the spot if she looks in another direction too quickly. To the parental astonishment, she figured the scooter in 5 minutes with little prompting, and spent some serious time playing on it without falls and with some surprising flair! She even wanted to be photographed which is not a normal HB request. 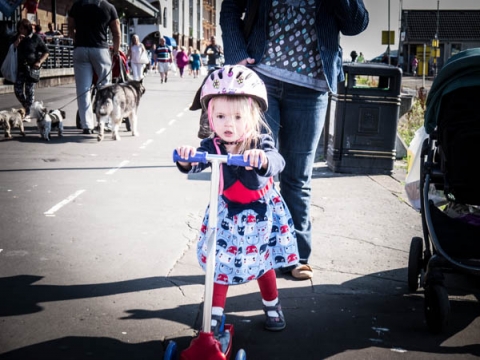 This final one shows the fun that can be had with the fold-out screen of the G3 which was held at ground level in a way that could not be done with the viewfinder. HB confident and happy with the new toy. 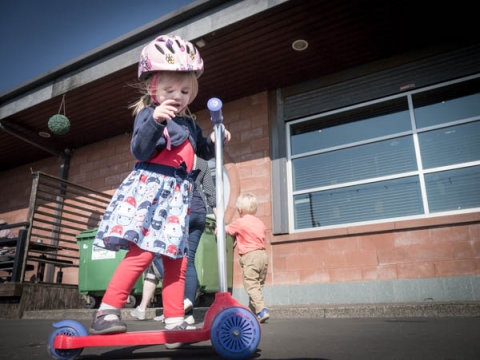 The camera is really good fun. I could have got better pictures with my Canon DSLR’s and fast primes, but this kit lens and pocket-rocket Panasonic punched way above their weight and would certainly interest me in trying a prime lens to really explore the potential of the micro four thirds system as a carry around camera.

HB liked Largs. As a kid, I loved Largs too, that’s nice!