Rest and be Thankful 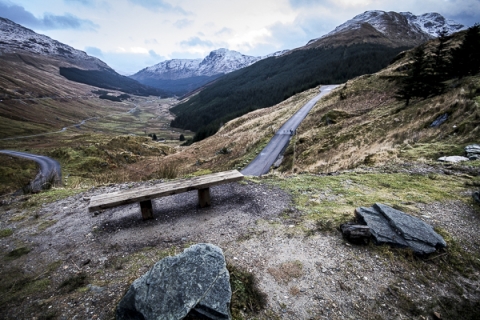 En-route home today from our extremely relaxing and enjoyable stay in Kilmartin, we inevitably had to drive over the pass of the Rest and be Thankful. This is pretty much the gateway road into Argyll and is more or less a 1000ft pass. It is odd driving into Argyll where we lived for almost three years recently and where I worked for almost the last 10 years. I crossed this pass daily for long periods and a few times a week in general. I seldom took any photographs of it however, so it was fun to stop for 10 minutes and just look again. My Canon 7D still had its 10-20 Sigma on from yesterday’s near sub-aqua-in-darkness photograph of Kilmartin, so I popped it out of the bag and shot 5 or 6 handheld shots thinking it was too grey and uninteresting to commit to the tripod since they wouldn’t work anyway! (Landscape specialists forgive me for this cardinal sin!). It turned out that they were acceptably sharp at 1/60th second anyway so on returning home I did a little work in Lightroom bringing some definition and emphasising interesting light that was hardly there in the first place.

The other big challenge was composing the image to get any kind of foreground interest. the bench placed approximately on the intersection of thirds has given the image some kind of balance. The shots without any foreground were utterly dull (as I expected them to be). It was a reminder to me that sometimes the shot isn’t sunbeams, low angled light and the gods smiling all over the photographer’s landscape. It is instead grafting with what little you have got and using what little you know to make the best of it!