What in the world is Mr Canon playing at?

23% of the worlds interchangeable lens cameras according to Wikipedia are Compact System Cameras (CSC) with no SLR style swinging mirror box. Canon has one model available in this sector to me in the UK, the EOS M. This was available in October 2012, and has pretty much bombed as a model. It is currently available for £199 when it was originally £760 with included external flashgun.

These cameras, such as the Micro-four thirds models from Panasonic and Olympus, the Samsung NX models, the Fuji x-Pro1and the astonishingly good sony Alpha models are innovating like crazy, with expanding lens ranges, ever quicker autofocus and add on viewfinders. Where is Mr Canon in all of this? Nowhere! They released an EOS M2 somewhere which doesn’t significantly vary from the EOS M and has shaken the photographic world in no significant way at all! It isn’t that the EOS M is a bad camera, it is just nothing special in a world of increasingly special CSC’s. 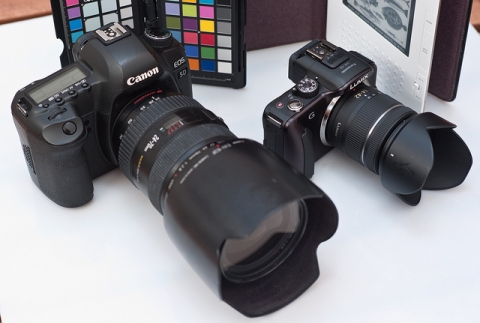 Why do I care? Like many photographers I would love to carry a decent camera with a larger sensor with me as often as possible, and although I love my EOS 5D, 7D and even 500D, none of these are easy to carry around in a casual bag never mind in a large pocket. I first tried to engage with a CSC when I fell for the Sony NEX 5 about 4 years ago. It is a gorgeous camera with a tiny and stylish body containing a full APS-C sensor, and now a fair range of interesting zooms and primes. (That was more limited when I bought mine but Sony promised quick growth, This didn’t come quickly enough although it has real momentum now). I tried to love this camera and you will find some shots taken with it on this blog, however, it taught me something important about my relationship with a camera; I need a viewfinder. I simply can’t be happy holding a camera out in front of me to gaze at a screen on its back. There are many reasons why that is not so good for picture taking around stability and shake, but for me it simply doesn’t feel comfortable and so I sold it.

About 9 months ago I was tempted to take the plunge again. The EOS M was being heavily discounted then and with an adapter it could also use some of my collection of Canon EOS lenses, however, I had learned, no viewfinder – no purchase! Searching online revealed that the now ageing (in CSC terms) Panasonic G3 Micro Four thirds model with fold out screen and electronic viewfinder was available for about £160 in Argos stores. I hot-footed it and got the last one in Scotland as far as I could find. From the moment I opened the box, I loved it. It came with a decent if unexciting kit lens (stabilised). What impressed me was the feel; this is solid and beautiful made and feels just right in the hand. It’s tilt out touchscreen is versatile and useful for taking the odd shot from different angles, and it’s EVF (Electronic View Finder) is superb. I’m sure newer ones are even better, but this one is good enough to make me happy and is practical in use, even in bright sunlight.

I really love the EVF as my near eyesight like many peoples’ at my age is deteriorating. The little optical adjustment on the EVF eyepiece means that I can see a pin-sharp image while composing and reviewing pictures without having to carry my reading specs. I was using my Canon EOS 5Dmk2 DSLR today, and had to have my reading specs on my head to check taken images for sharpness on the rear screen. When using the G3 there is no need to take my eye away from the viewfinder to do anything. This is a win in every respect for me!

The size of the camera is also a big win for me. It is around about two thirds of the size of my smallest DSLR and significantly lighter. I carry it occasionally in a small messenger style bag along with my iPad and it is very comfortable. No lens combination with my Canon 500D has ever felt so comfortable, although I now have a partial solution. (More shortly). So I love this camera, why don’t I just buy some lenses and begin enjoying it, and possibly upgrade later to one of their modern rangefinder style cameras with compact looks and a nice built in EVF? In short, it’s the glass. The lens I want is the 25mm f1.4 prime and it is around £430, or perhaps the 20mm f1.7 prime at £290. These cross a line into me “buying into a system” when I already have some great glass for my Canon DSLR’s.

I have just been given a small 28mm f2.8 pancake lens for my EOS 500D to allow it to be a fixed lens, carry-about camera. It works reasonably well, although f2.8 on APS-C sensors is the minimum speed of lens I would be happy with.

What I really want is the Canon M series 22mm f2 prime. The trouble is Mr Canon has not produced a smaller mirror-less camera to follow on from the EOS M. If Canon did this, and included a decent Electronic Viewfinder, than I would be all over it. I could carry it in my bag with its little 22mm prime as a near normal view lens, and if travelling carry a few larger lenses in a case or car and have total versatility. While we are on the subject why doesn’t Canon simply drop the mirror box and optical eyepiece on their lower end DSLR’s like the new 100D. If they did this, then those DSLR’s could become nearly as small as my much loved Panasonic G3 and I would be able to use them with all the advantages of the EVF for a long-sighted photographer.

The final, annoying question is why have they not done so yet. It is the Innovators Dilemma in practice. Canon and Nikon DSLR’s are still dominant in the interchangeable lens market, they don’t want to cannibalise their own successful market share. If people start identifying Canon cameras as “like the other CSCs” then they have to really compete on innovation and quality whereas right now they don’t. If you don’t cannibalise your own market then others will; it is a law of business and Canon will ignore it at their peril. I may have bought into a large Canon DSLR system, but I give buying advice to a lot of new photographers, and if Canon don’t start to address my needs, (and doubtless those of thousands of others), then my recommendations will be shifting to Panasonic or similar CSC’s.

Are you listening Mr Canon?