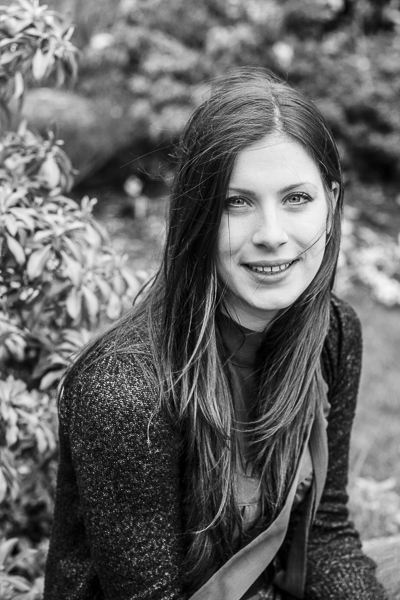 Well eventually I had to continue with my occasional revisiting of my 100-portraits project. The next one in order was Sheona (no 24 in order in the original 2008 project). The session with Sheona was in Kelvingrove park and was just great fun and very relaxed indeed. The original choice of image for the project was a dramatic “looking-straight-upwards-into-the-camera” image, so although there were stacks of great images from that session, I wanted to go for a more traditional portrait pose by way of contrast. I can’t say wether this would have been my second choice, but it would have been in my top 10 which says something about how usable most of the images from that session were!

The black and white preset was applied after making some local adjustments to get the lighting looking right. As many of my blog readers will know, I have a thing about green foliage backgrounds. I don’t hate them, but I don’t think they make the best portrait backgrounds.  I have a pet theory about the way we are hard-wired to survey foliage and how that distracts from the subject. I found that a nice bright and contrasty preset totally reduced that distraction and allowed the foliage to become lovely texture instead.