Yesterday, I fulfilled a long standing desire to visit HMS Victory, Nelson’s flagship from the battle of Trafalgar. As it happens, I am having a lovely holiday with some amazing people in Dorset. We decided to take the opportunity to drive the hour or so to Portsmouth to indulge my Napoleonic naval desires! 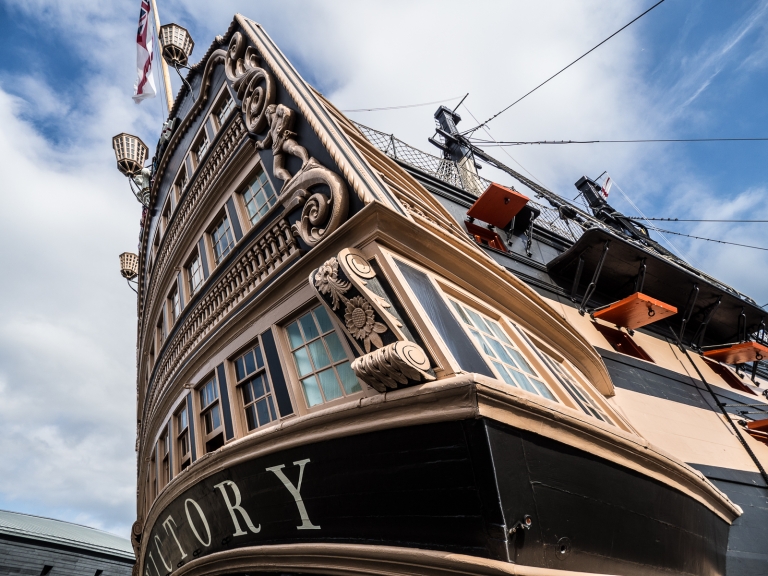 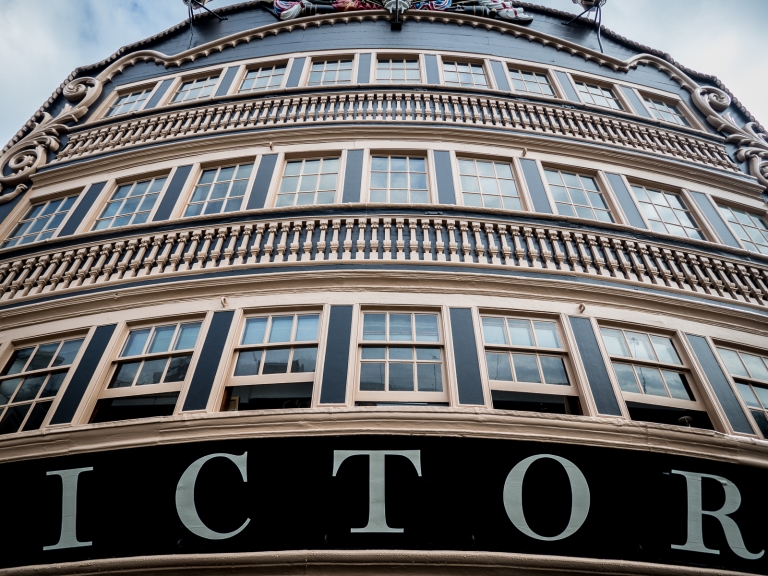 My first feeling on arriving at the dry-dock that has been Victory’s home for 90 years was disappointment that she has not yet been fully masted and rigged. But it turns out that there is a sound preservation based reason why not: apparently it may have new rigging within a decade, made from carbon-fibre of all things to keep the mass lower, as her timbers have settled and distorted in dry-dock and the extra weight would accelerate this. Good to know that her keepers are taking her long term future seriously. (You can see the truncated rear mast towards the stern in this image) 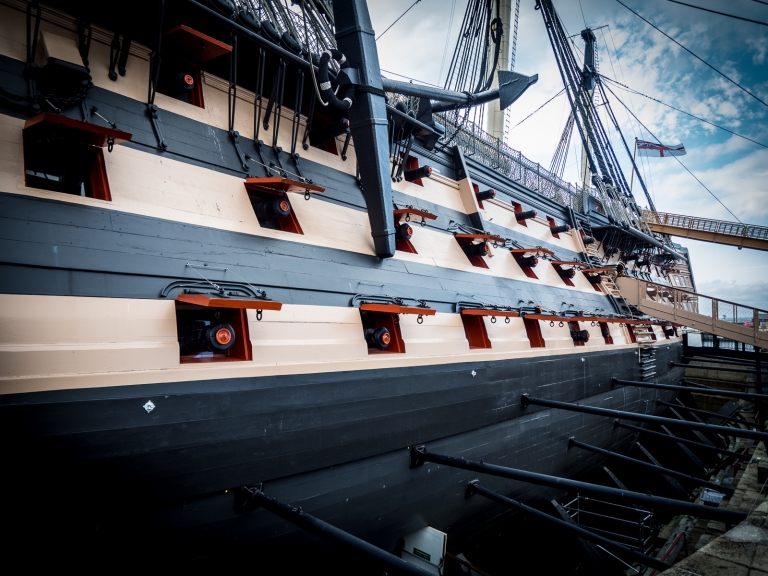 Photographically, I was simply not planning any photographs at all; I only wanted to see the ship. But when I arrived I took one stern-view with my phone to share my excitement, and put it from my mind. It was only when I saw the Captain’s (the famous Hardy) day-cabin that I realised it might be fun to try to catch some sense of this truly amazing piece of naval history. I have a basic wide-angle zoom, the Olympus 9-18 with me in my messenger bag with my ever present Olympus OMD 10 Mk2, and haven’t used it much yet, so the relatively tight interiors seemed like the ideal place to make some use of it. As a wide angle zoom it is tiny, barely takes up any space at all in my messenger bag, and is a useful width for interiors or landscapes. On the downside, you can’t fit a fast zoom in to a tiny package, so it is slow at f4-5.6 and the deeper you go into the bowels of Victory, the darker it gets. This meant shutter speeds at ISO 3200 (my preset hard limit for noise) of 1/8th of a second. The secret weapon of the Olympus is it’s sensor-shift image stabilisation and with careful hand-holding it will give sharp images. (Down to 1 second!) 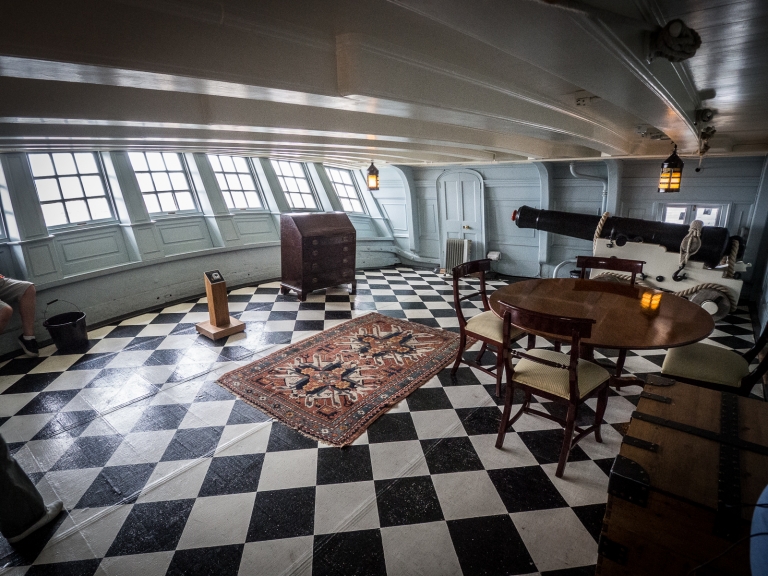 This is the adjoining sleeping cabin with the 6 foot 4 inch Captain Hardy’s cot-hammock: 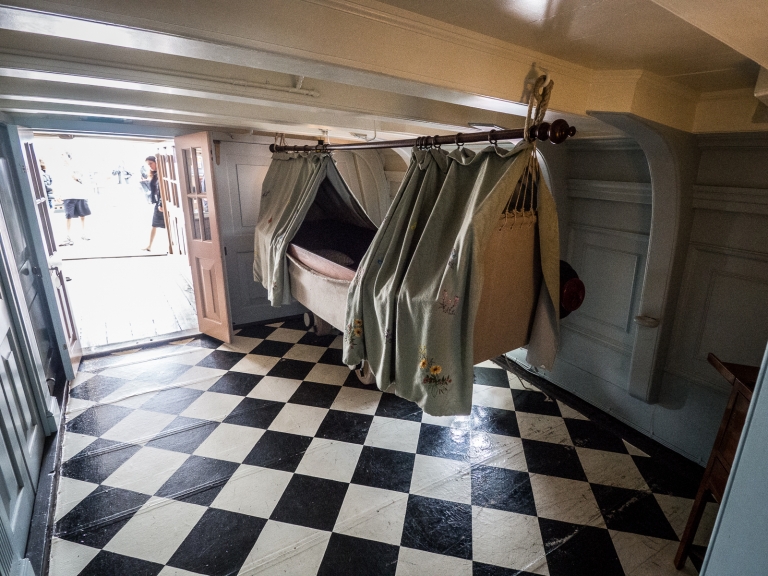 The other interesting challenge is waiting in spaces until most of the tourists have passed on. Sometimes they add scale to an image, but most of the time it helps to see the ship interior with fewer distractions.

One deck below, Admiral Nelson had these quarters, first the dining and entertaining cabin: 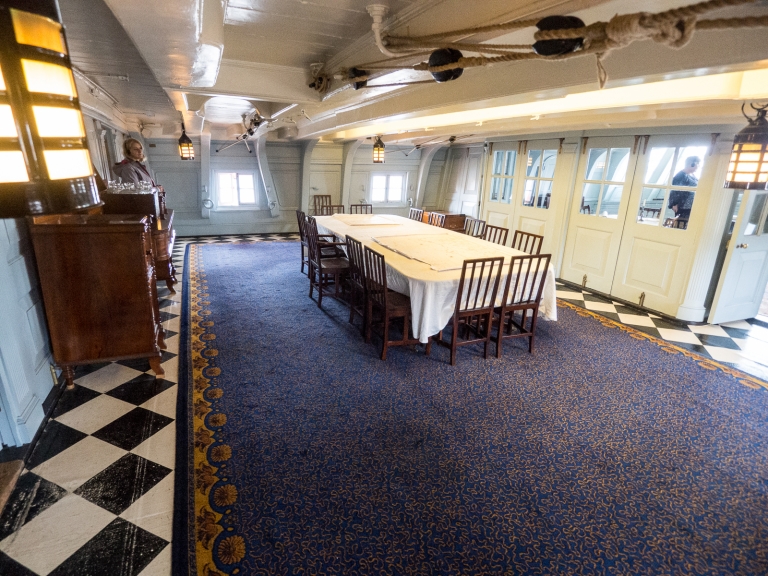 Then Nelson’s day cabin. (At least at the time of the battle of Trafalgar): 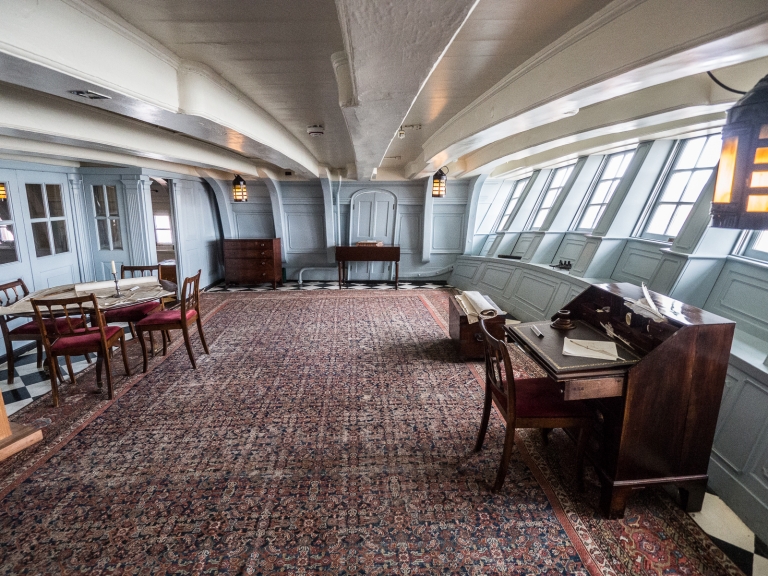 The same cabin from the table: 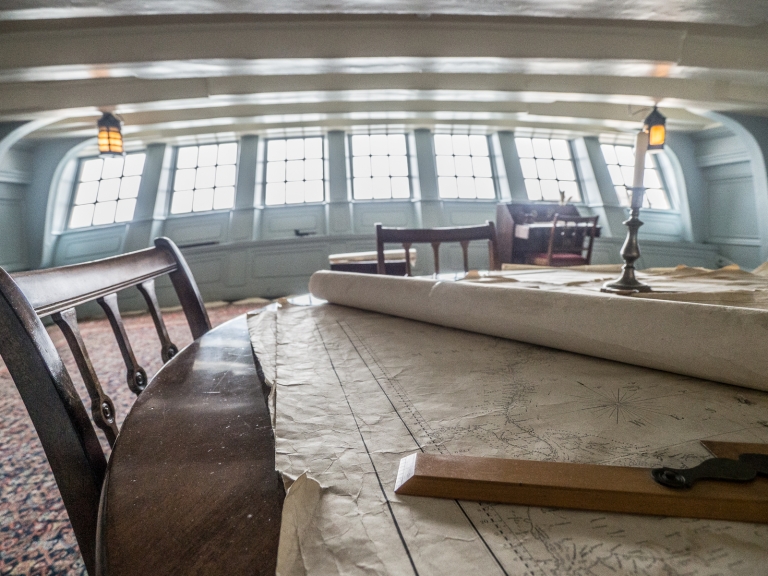 And this rather indelicate one of the Admiral’s heads (toilet). This was in very stark comparison to the holes in planking over the bow used by the ratings to take their relief: 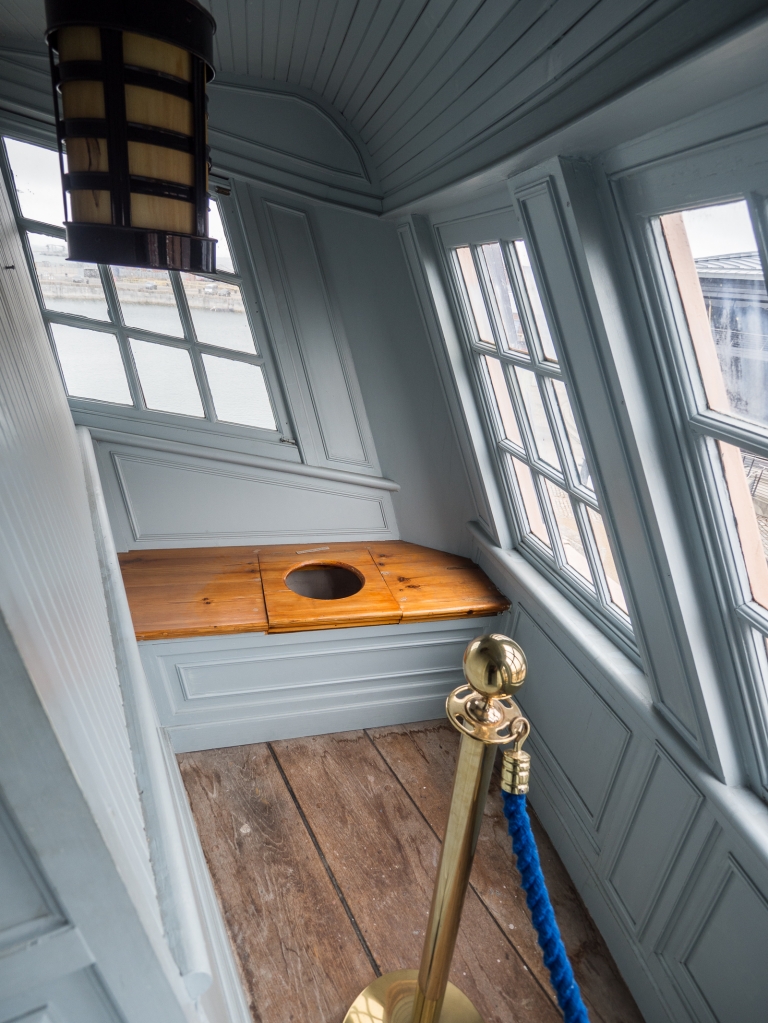 But above all, this first rate ship of the line was a fighting ship and carried 104 cannon and carronades. To face broadsides from these Napoleonic behemoths must have been living hell. These pictures are of some of the gundecks – 3 in all – which in combat would have included the Captain and Admiral’s cabin floors in one long sweep: 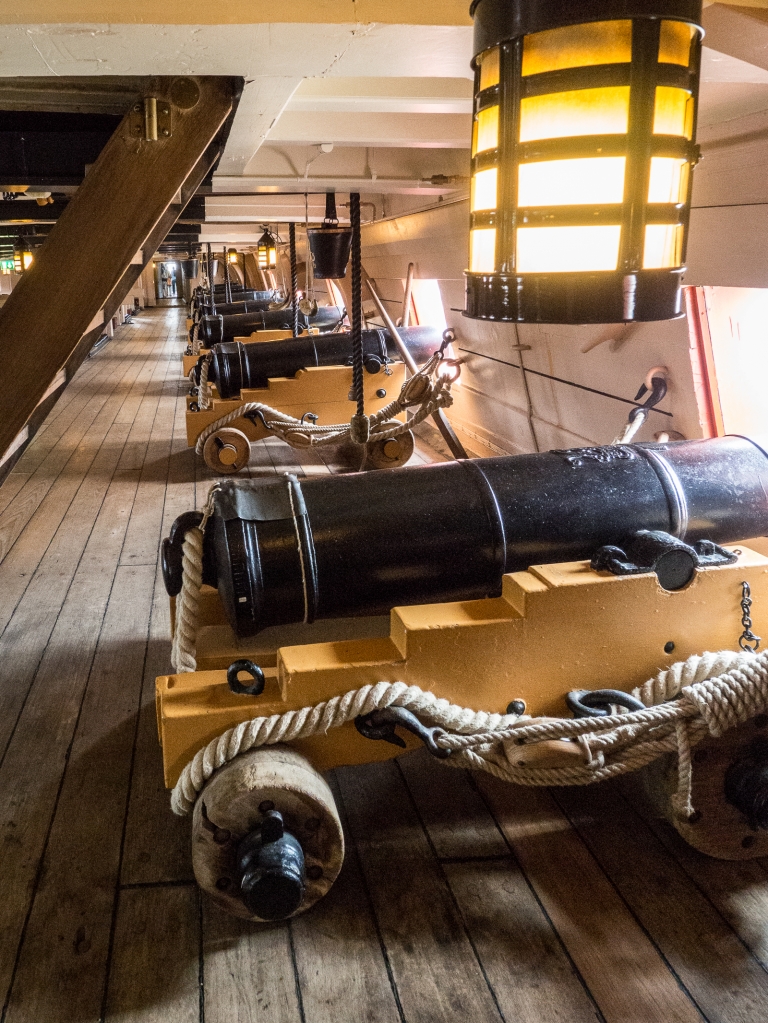 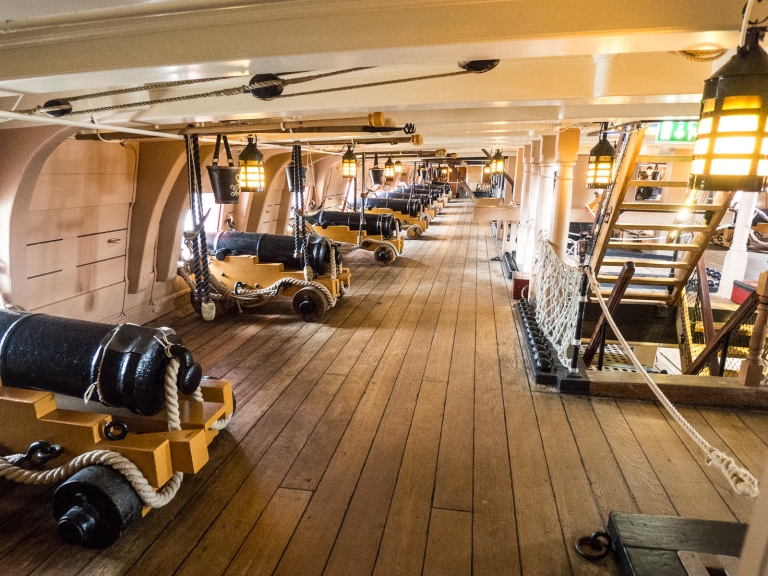 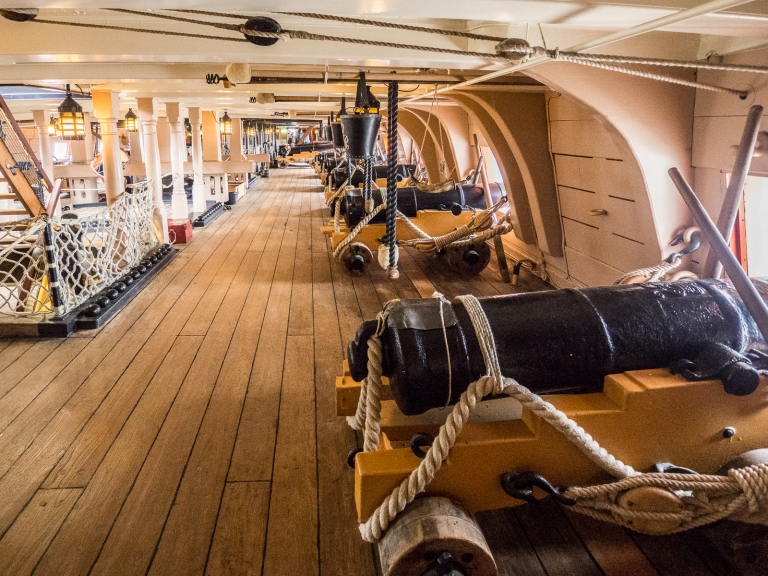 This one is a reminder that this is a multi-decked flagship: 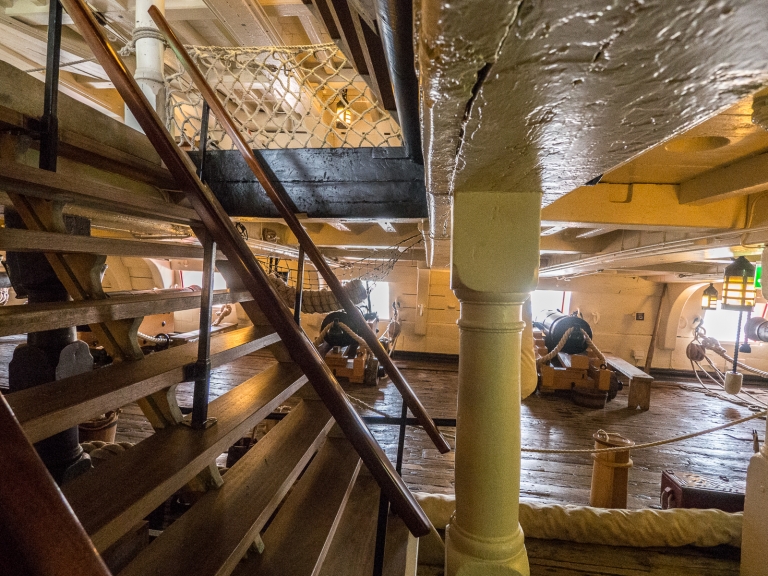 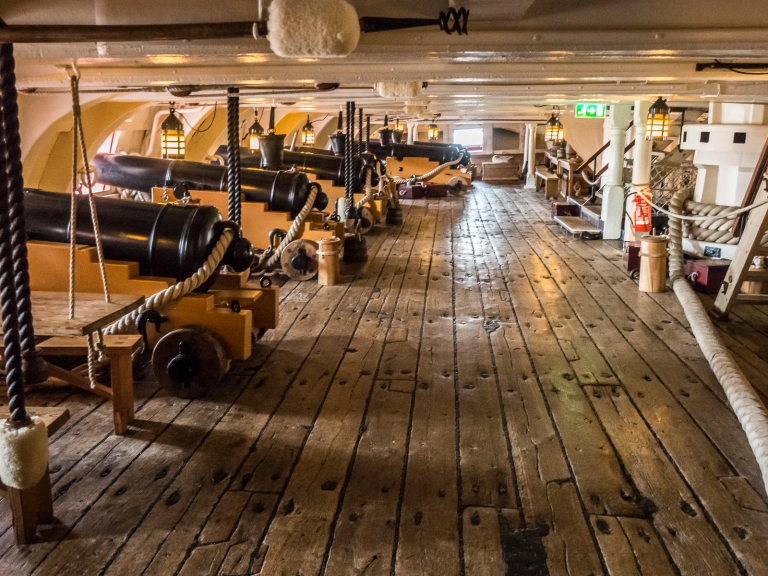 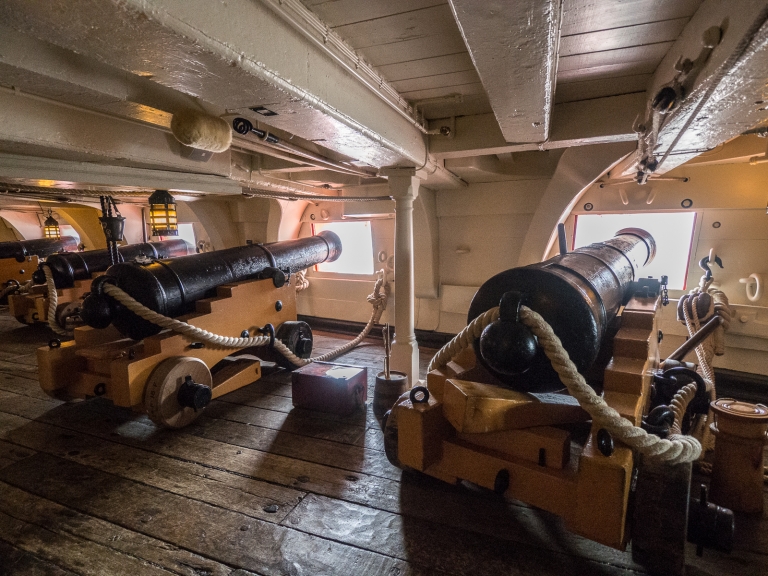 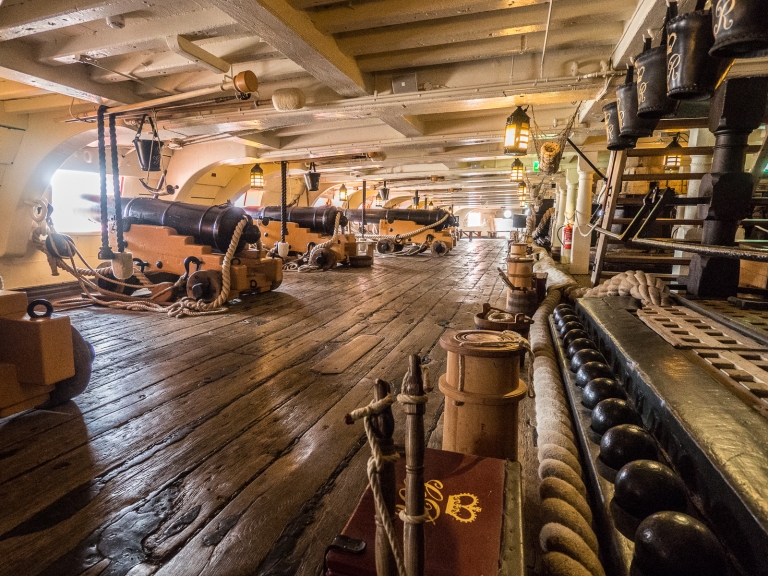 Of course, in-between the bouts of martial activity, 800 men and boys had to actually live. These pictures show the gun crew’s eating arrangements: 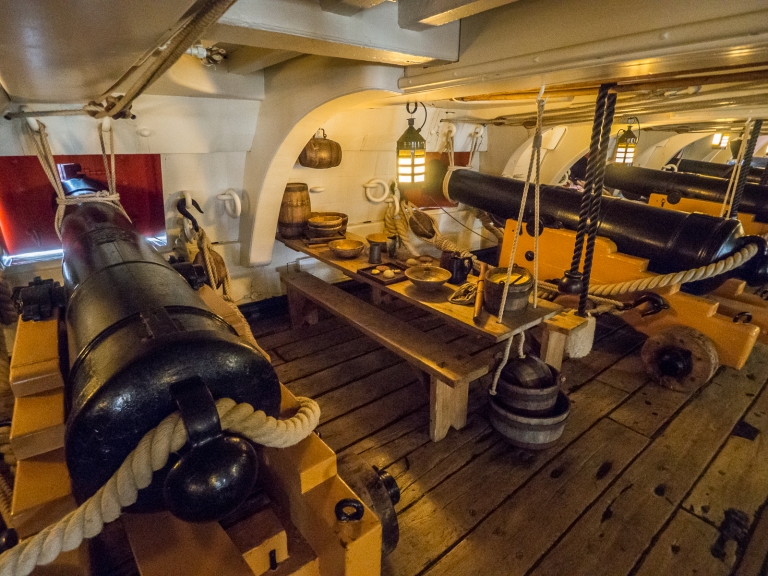 And of course everyone knows how the ratings slept:

(This picture below the decks blessed with natural light so the next image was high ISO and noisy.) 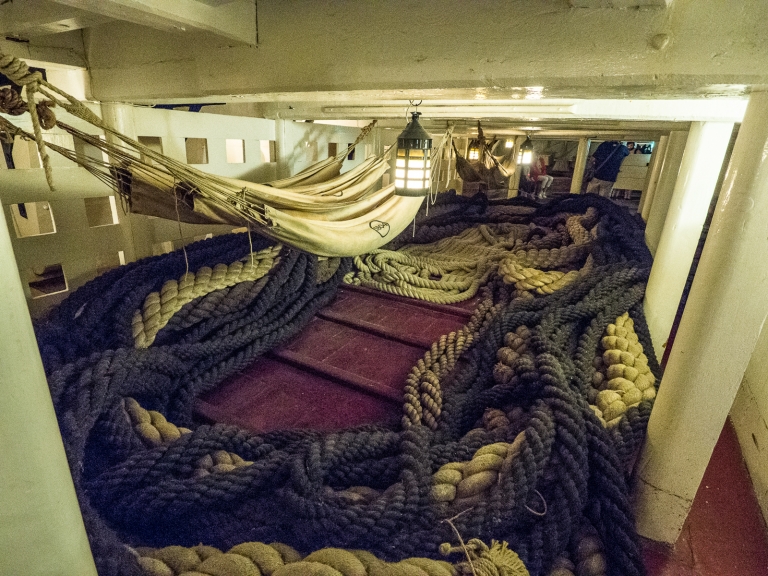 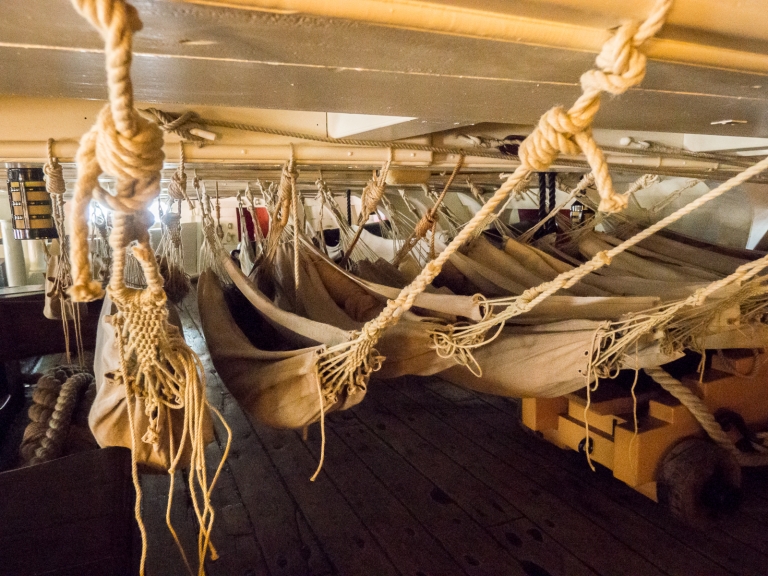 The ship had to be self-sufficient in terms of essential working crafts as well. Below decks in the incredibly cramped, no-standing-room-for -tall-adults, orlop deck there are some specialist areas. This is the Bos’n’s store: 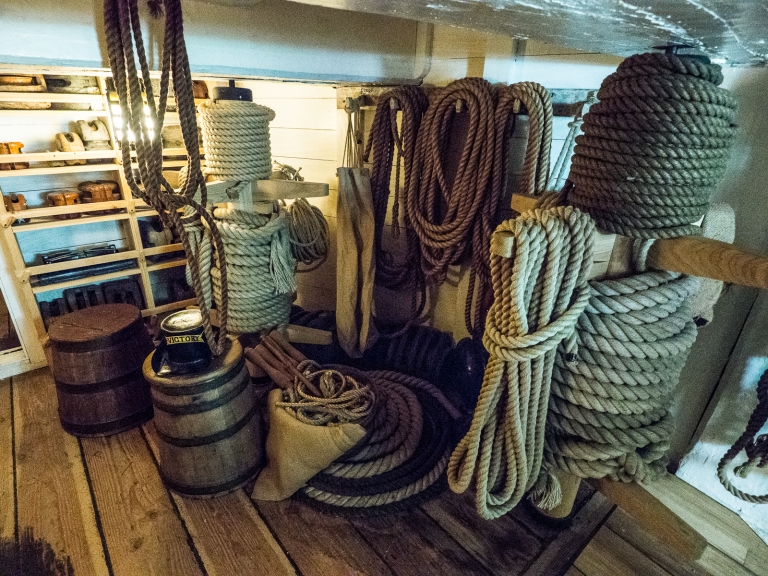 Low down, below the orlop, these ropes are as thick as human waists. Look at the telegraph-pole sized pillars for a sense of scale. How the crews handled this stuff without automation is a miracle on its own: 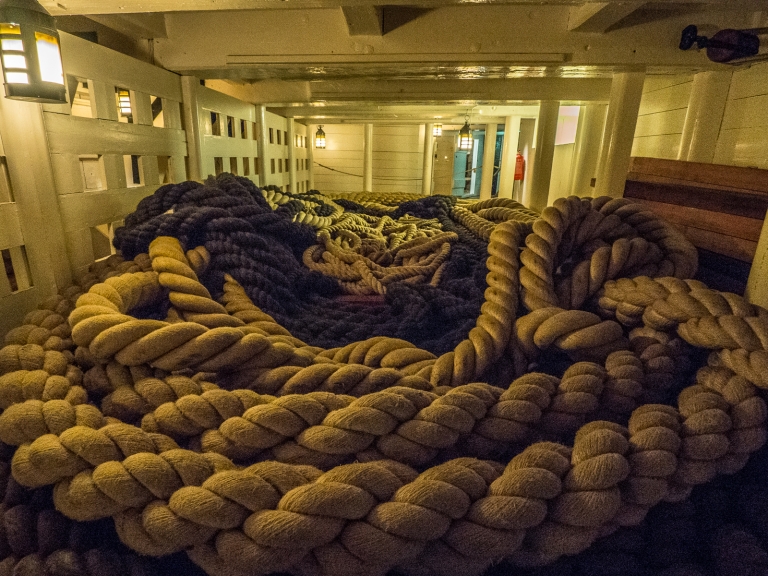 The next two are carpenters’ areas: 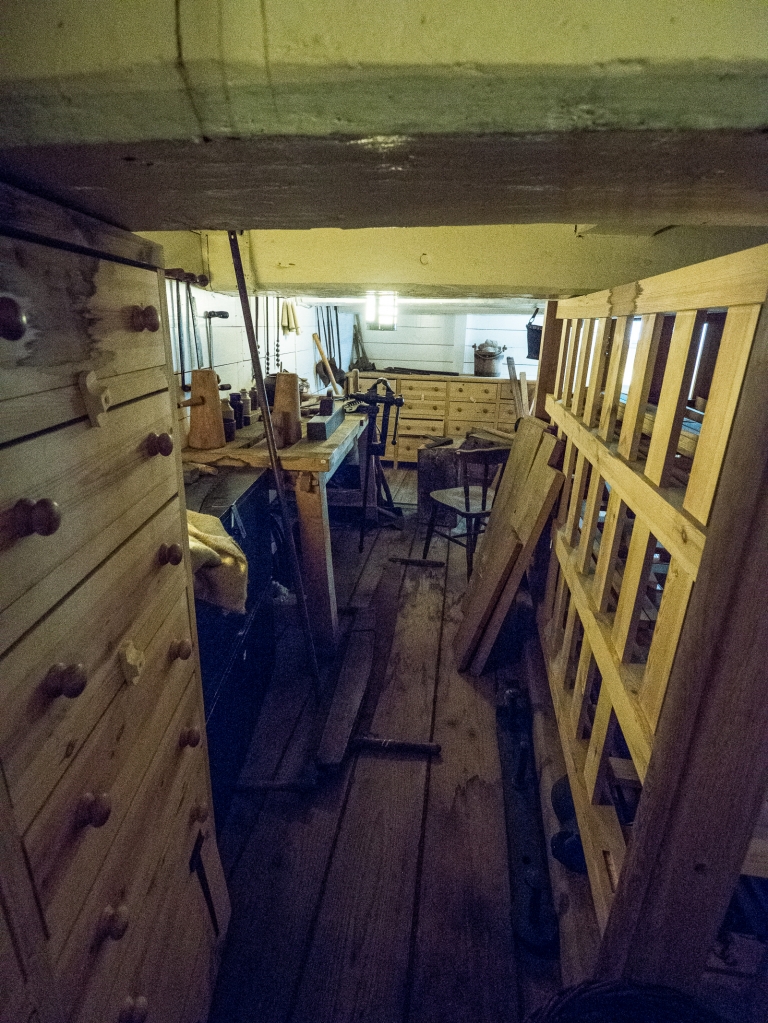 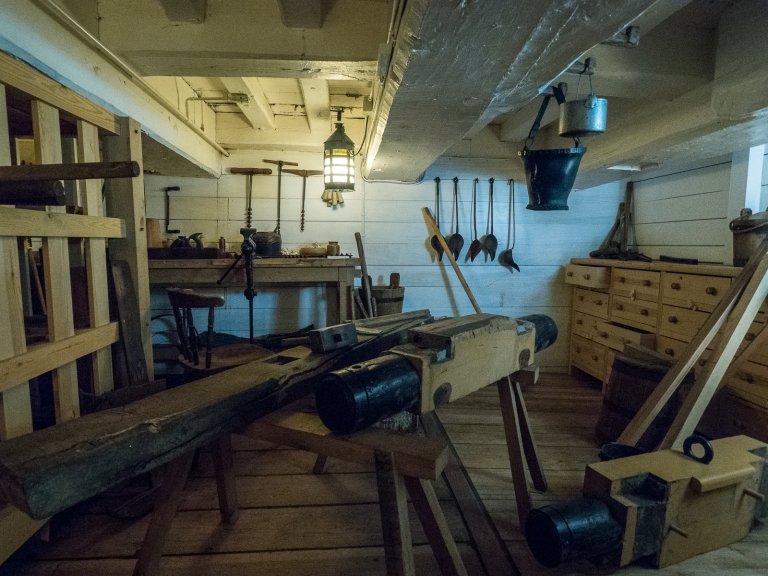 I believe this is a portable forge up on a gun deck: 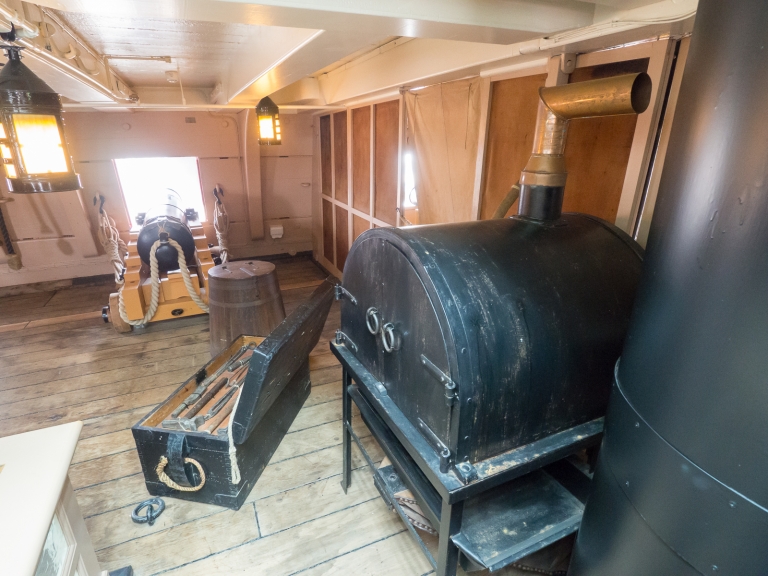 And lower still, we come to the holds and bilge areas. Water, being heaviest, was stored her in barrels on a bed of stones as ballast. No natural light reaches here at all: 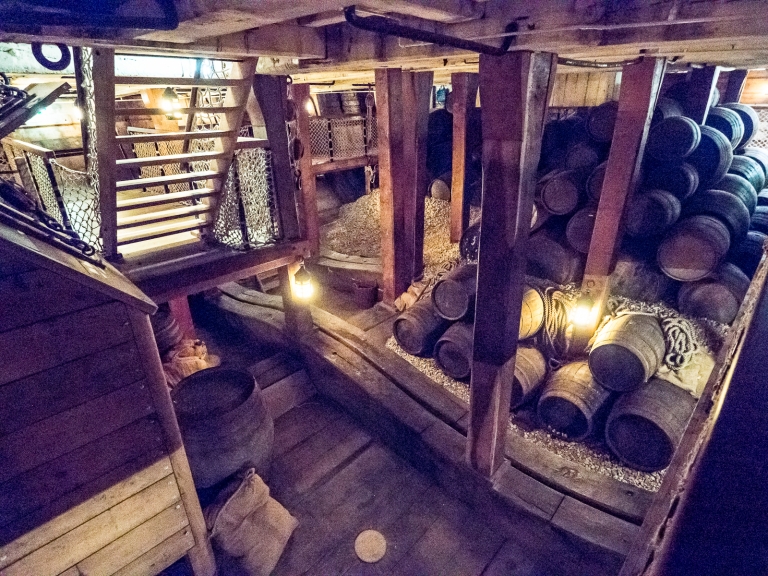 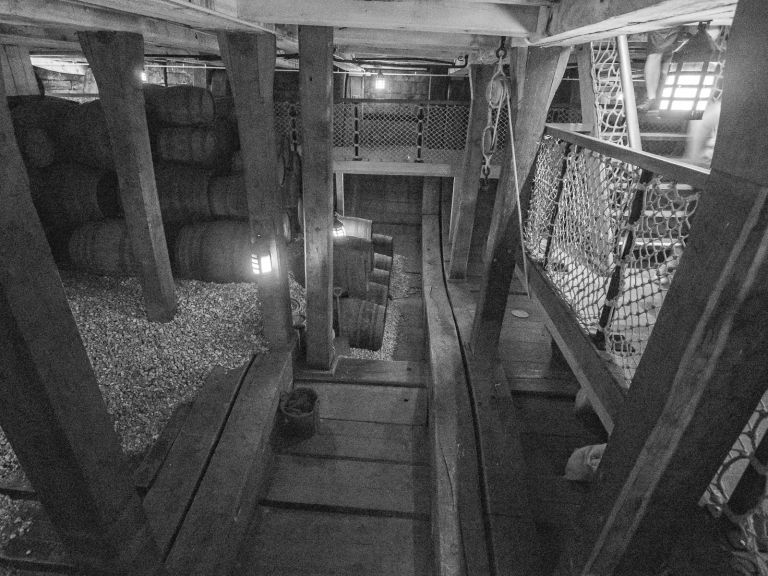 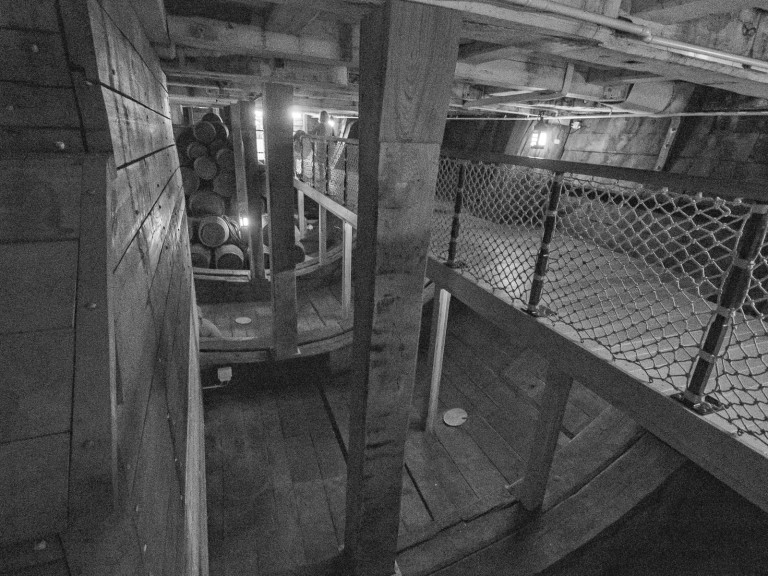 This last image shows where Nelson slept in a portable field bed as, one armed, he couldn’t easily get into a hammock without assistance and he was too proud. Big cheese or not, in action the admiral’s sleeping arrangements were quickly cleared and the temporary doors gone too. This was just the posh-end of a truly terrible gun deck: 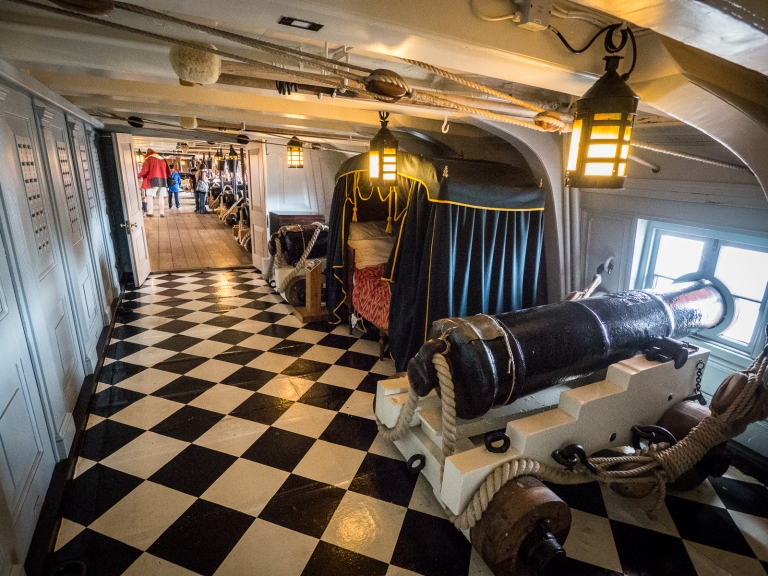 Nelson was shot on deck during the terrible battle of Trafalgar, and after some hours, he died below decks. The wooden wreath on the rib of the boat shows where he died: 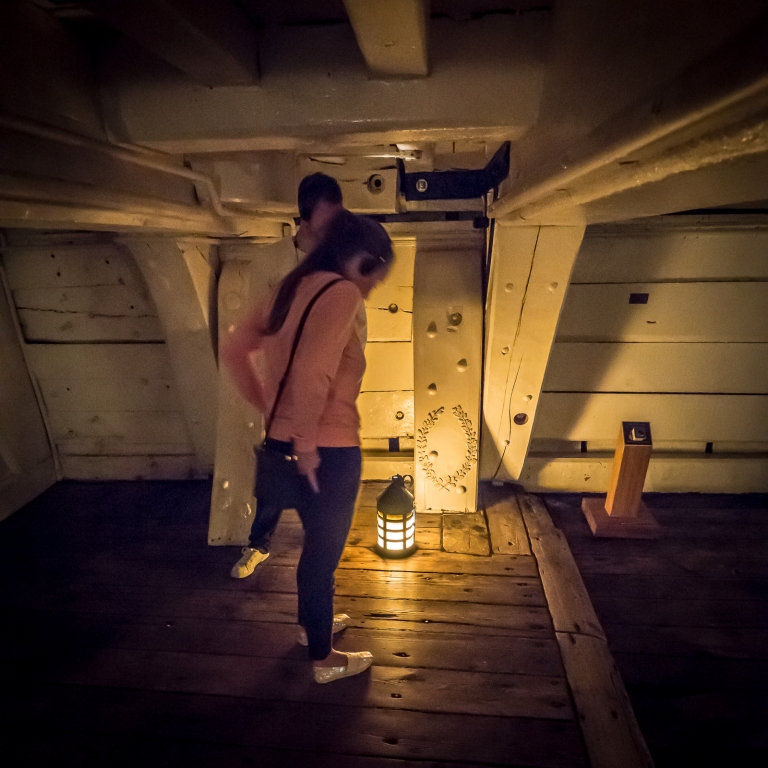 The Victory, built around 1760, is simply one of the most amazing preserved displays of history I can imagine seeing. Whether you are fascinated by military history or not, you will have your breath taken away by the scale of this pre-Napoleonic engineering marvel. If you are in Portsmouth, you simply must!