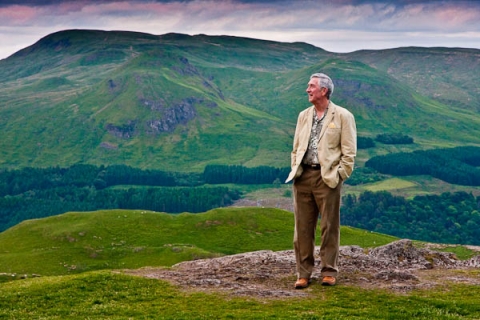 Who is this devastatingly handsome Canadian I hear you ask? Well it’s none other than my colleague and friend Jim Craigen. I posted a picture of jim in a candid moment a few postings ago and joked that he looked like a TV detective. Well Jim has been in Scotland since then and on the night before his return to Toronto I had the great pleasure of spending some time with him again. We drove around the greater Glasgow area exloring various areas such as Renfrew where I grew up, ( his lovely wife also grew up in Renfrew, but in Canada!), and finally knowing Jim’s fondness for a stroll we ended up at Queens View (Auchineden Hill) looking down on Dumgoyne and Earls Seat on the Campsies (1st picture) and Loch Lomond with Ben lomond to the right. This may not be a hillwalk in the true sense but  15 minute stroll into a fairly wild area; it cannot  be common to see people with a handkerchief in pocket taking the hills and the dreaded midgies in their stride.  That’s a man of style!

This one required fill in flash to prevent Jim being a silhouette. Sadly I only had onboard flash so it’s a little straight on, but it shows Jim nicely against the ever striking background of the Loch Lomond hills and the loch’s many islands. 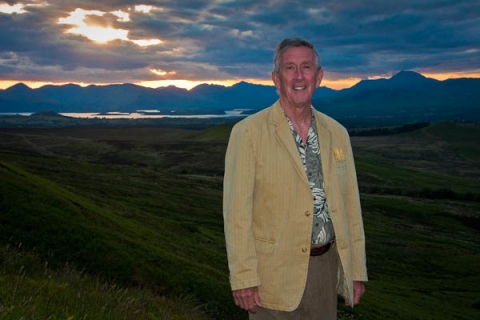 And finally a close up of Ben Lomond (Scotland’s southernmost 3000ft mountain) for Jim’s benefit. Hurry back Jim, you will be missed. 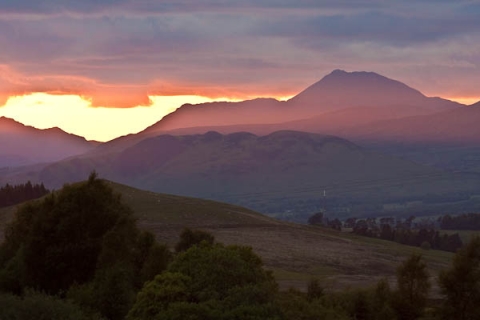 The untold part of this story is that I fully intended to take Jim out for dinner, but was beguiled by the bright Scottish evening into thinking it was earlier than it actually was. When we returned to the car and headed for dinner I realised that we were already near 10pm which was the standard retaurant closing time on a Thursday evening. The long and short of it is that I ended up to my embarrassment taking him to a chip shop and us eating dinner in my car at 11.00 pm with pizza for my vegetarian self and a scotch pie for Jim. Argh, the shame (he was typically good humoured about this)…..

Final note: I have beeen playing with my new EOS 500D recently and so this was my first session with my trusty 40D for a few weeks. It fit my hand like a glove. No-one should be deceived into thinking that the 00 series 400, 450, 500D feel anything like the 0 series 20, 30 40, 50D in the hand. They don’t. The 40D feels like a really professional and sturdy tool. It felt like coming home in camera terms.