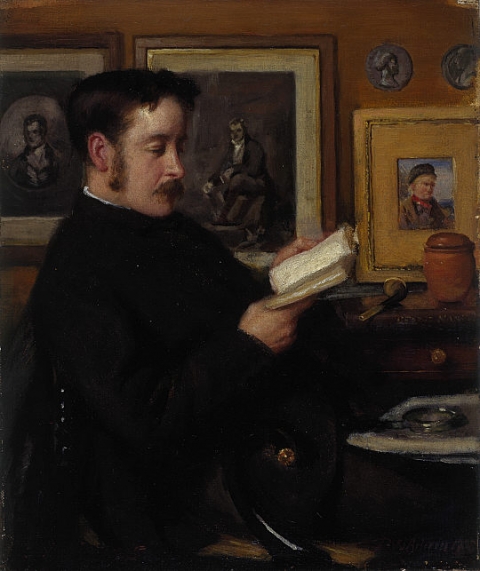 Born in Edinburgh Scotland in 1854, Patrick William Adam once said that he “was inspired to paint by the lush emerald landscapes of his homeland. The son of a well-known lawyer, Patrick chose a career in the arts rather than follow in his father’s footsteps. Accepted to the Royal Scottish Academy, he mastered his technique under the tutorial of G.P. Chalmers and W. McTaggart.

Originally, he began honing his craft as a portraitist before specializing in landscape painting. He is best known for his genre painting of interior scenes, created with his light and airy brushwork in an impressionist style. He exhibited his works, which were well received at the Royal Scottish Academy, as well as the Royal Academy, and won the acclaimed Maclaine Watters medal in 1878. Patrick Adam died in North Berwick in 1929. (From Global Art Gallery: www.globalgallery.com)

This portrait doesn’t seem typical of the paintings that I have found online by Patrick William Adam. The pictures that seem to have endured are the rather “mannered” and impersonal paintings of Edinburgh breakfast rooms with light flooding in to their people-free spaces. This one that Gerry has chosen has the subject essentially not interacting with Adam at all. The portrait is intimate mainly because the view it offers us of John Gray has some of his personal possessions around him and is relaxing by reading, again indicating that we are voyeurs here. The paintings in the background tell the story of Gray’s profession, but his face, tells us little.

I thought immediately of our local picture framer and artist, William Masson. William kindly agreed to sit for this portrait in which he has some personal posessions and the tools of his trade around him, telling his story for him. William is reading his book and, critically, not engaging with me. I tried to keep the picture totally impersonal, but looking at the scene through the viewfinder, I softened the scene a little by asking William to look up from his book to allow us to see a little more of his face, perhaps that’s a little of my portraitist’s desire to explore faces asserting itself. The picture was enjoyable to do, and I certainly feel I explored a different style of portrait. 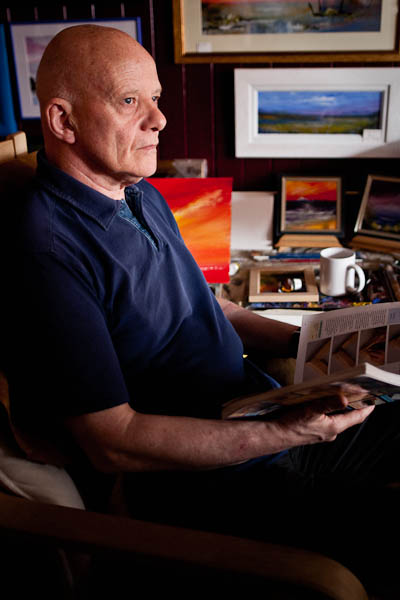 OK, so what’s all this about? Since my “100 Portraits” project I haven’t been stretching myself as much as I would like to, and while I am still regularly taking photographs I feel that I need something to make me learn some new approaches. I have always wanted to try to learn more about some interesting artists and try to take some inspiration or even provocation from their work into my photography.

I have asked a small group of friends to select a single painting by an artist that they don’t know anything about. The twist is that I want to work my way around the alphabet from A to Z! My friend Gerry, who discussed the idea with me originally, has given my my first challenge; the picture you see above. Not only will I learn about an artist, but hopefully the friend making the choice will also enjoy learning about the artist’s work.

Watch this space for B!