Well, this portrait photographer is trying something new again. It’s round 2 of the Amateur Photographer contest, “Inside a Building”, and I thought I would use it as an excuse again to try some new pictures. This weekend I snatched a moment or two in 2 shopping centres and a car park to catch some modern interior architecture.

This first is the wonderfully pointless, (and I’m not being sarcastic), plastic gubbins that the revamped St. Enoch centre has fitted just to show that the centre is designed, not just constructed. It blends exoskeletal themes, nautical/gill themes with male flower parts in plastic magnificently. It was all so busy that I removed the colour to allow the elements to separate out a bit. 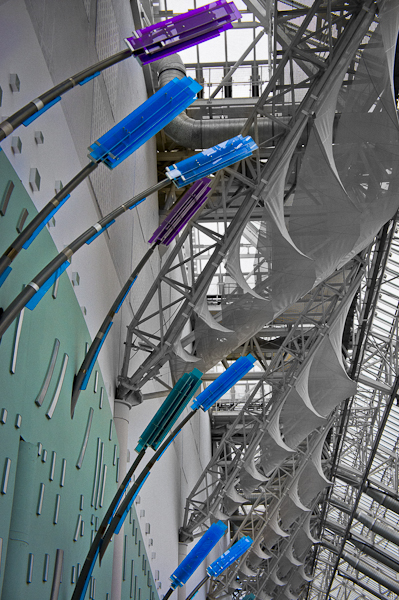 Of course by this time I had become rather taken with colour emphasis. This car park, (Q Park) in Glasgow is typical of modern design-to-a-budget, rather ugly, but adorned with something to cheer it up. In this case some natty red slats. Although I removed the other colour, they were way more colourful than anything else in the car-park-blandfest anyway. I was initially drawn to this scene because the church behind had a classical architecture and craftsmanship that contrasted strongly with the stark utilitarianism of the automotive domain. Apparently in writing this I have become all pompous like architects do… 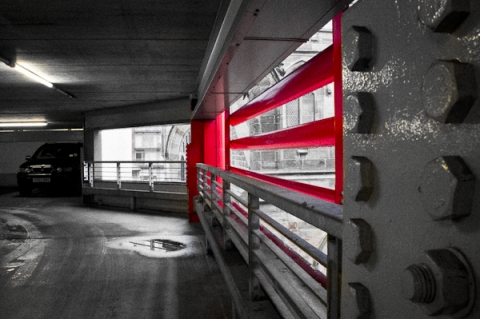 Finally, this is is a simple ceiling detail from the Braehead shopping centre in Renfrew. This is the joining corridor to one of the car-parks. I am genuinely impressed that the designers of these modern centres actually try to do something creative, and even beautiful within budgetary constraints. It is normal to poo-poo modern architecture, but the massive Braehead centre was never going to be built in hand carved stone with buttresses, gargoyles and pediments; given that, and remembering that this is just an access corridor, I think this is rather nice design. 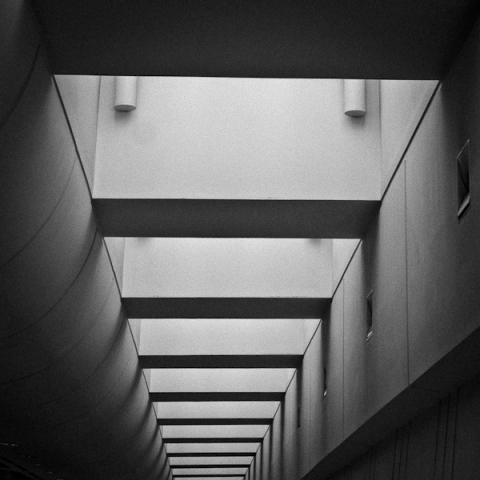 All taken with my fascinating, flawed and brilliant Sony NEX 5.