I accidentally found myself at the viewpoint carpark above Paisley at the dramatic edge of the Glennifer braes tonight just as it was turning dark. I confess that I had gone out to try and catch a nice view just to exercise my landscape skills, but I only had a short time and the route I drove was so dangerously snow covered that I couldn’t find any stopping places for the car as all verges were completely snow covered. Having struggled to get the car up to the braes at all, I didn’t dare backtrack on sheer safety grounds! So, hoping to snatch anything interesting, I set up my tripod and my 7D, and took a few long-exposure shots of the lightscape below. This one is the view of Paisley Abbey, then the busy road to Renfrew with its Gothic town hall dominating the upper right hand area at the end of the bright road, and although you can’t see it, the Clyde is just behind that with the four high flats beyond being roughly around the Yoker area of Glasgow. 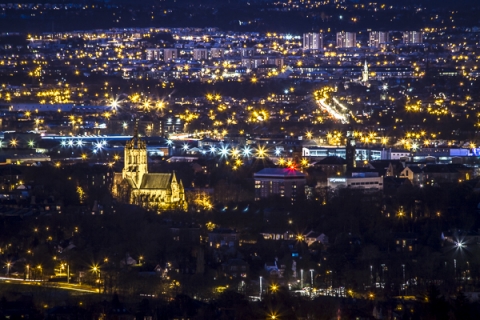 I couldn’t decide whether the colours were distracting when the density of light points is so huge to start with, so I converted a near identical image into black and white and would welcome your view on which works best? 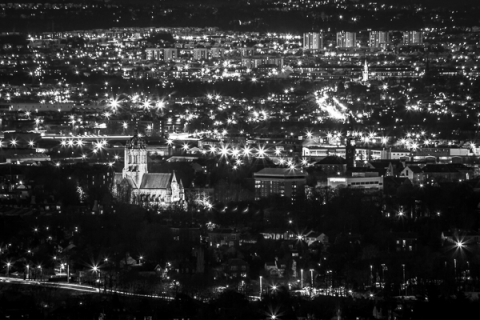 I don’t really rate this other image, and normally wouldn’t bother posting it, however, pointing the camera slightly left of the previous view, shows you the Kilpatrick Hills in the background behind the Clyde, the Erskine Bridge with its curve of yellow lights in the upper right of the image, and Ben Lomond in the upper left. Behind the long central line of motorway lights (A737 Linclive Spur) is the large area of Glasgow Airport. The foreground shows the red tail-light trail of the road from paisley up the Glennifer Braes and illustrates nicely the long, 30 second exposure required here to get anything in such darkness. Impossible without a tripod!

The First image was a telephoto with my 70-300 IS lens and the other was using my 17-85 IS. (IS switched off for both as it tends to “fight” with the tripod and Canon advise this).

I post these pics on my blog at 600 pixels wide and this kind of shot shows the shortcomings of that resolution. the extra resolution and detail on the original image makes these at least interesting pics, but the reduced pixel count doesn’t work well for the myriad dotted lights! I will look into how I could also upload a higher res when it really matters.