I went to Tiso’s outdoor shop in Glasgow today to buy some snow-grips for jogging. While there HB and I went into their cafe for a capuccino and babyccino. There was a really bright sun streaming in the window of the cafe (45 mins or so till sunset), and after she chose her seat, I deliberately chose one that put her between me and the sun-streaming window. It was extreme to the extent that I couldn’t see the waitress who attended our table except in silhouette. As HB and I were chatting, (for chatting, read, HB was correcting my manifold misconceptions about everything), I pulled out my 500D with 40mm pancake lens on and HB and I spent a few minutes trying to get a picture I was happy with. HB looked at each exposure in-between shots and acted a bit like a grown-up portrait subject in that she was slightly interested in the effects of her poses. After 5 shots, this was my favourite; it wasn’t her best, it was one of two in which she covered the food around her mouth! I placed the bright sun behind her, and of course used the pop-up flash to fill her face from the front. 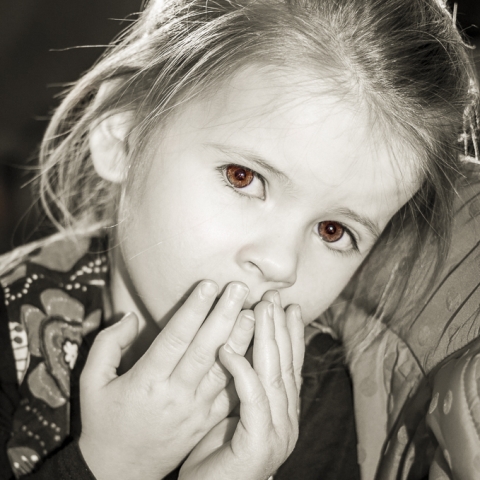 What was particularly interesting was the very organic way I was playing with Lightroom to post-process the image. It was fun to shift the “clarity” slider and watch the effect; in this case the fascinating observation that a 3 year old has nothing to fear from the sharpening effect on the skin! Sliding the “saturation” until the eyes suddenly seemed to “pop”. Deciding to use the paintbrush tool to remove all colour from the image except her eyes. The realisation then that the warm brown of her eyes was too mismatched against the monotone of the desaturated image and then reintroducing a brown hue to the rest like a slightly sepia treatment. The hue isn’t really noticeable, however, it lets HB’s eyes sit more naturally in the (admittedly stylised and playful) image.

I am tempted to try these “recording my Lightroom” session posts for viewers interest. Would that be of interest to anyone?