OK, so what is so special about this camera for me? Why am I so besotted?

Let me start with size.  (From the brilliant camerasize.com) 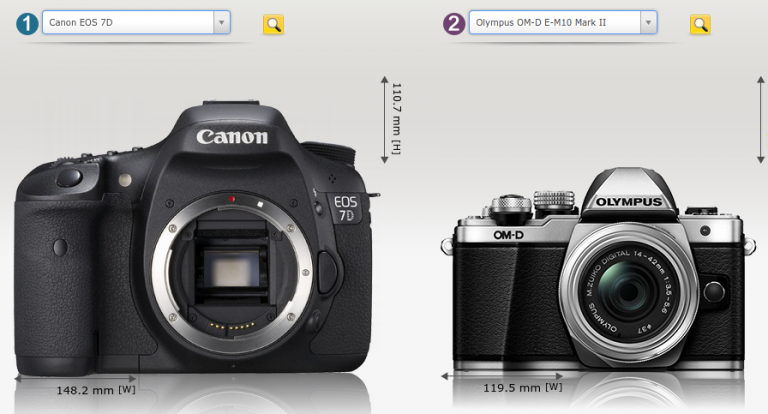 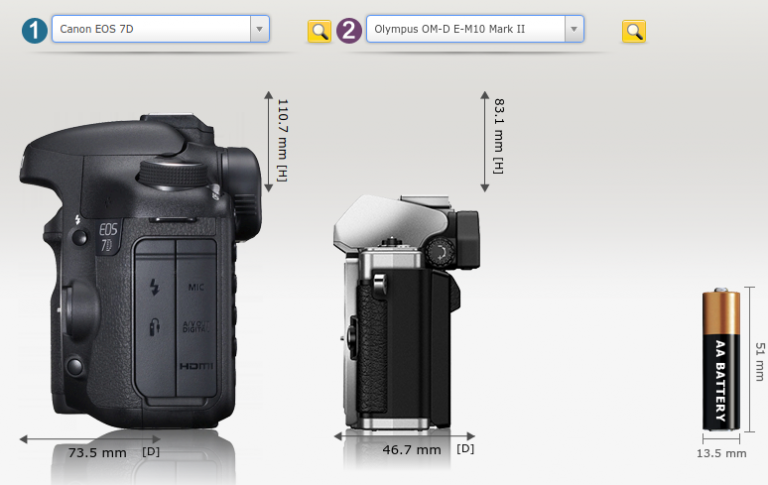 This is a comparison between my Canon 7D and my  Olympus OM-D E-M10 Mk2. This gives a sense of how much smaller the Olympus is, but what it doesn’t tell, is the weight difference; it is huge. Using the 7D single handed (to hold remote flash in the other hand) is a challenge and I am 6 ft 2 ins tall and well built. Holding the Olympus single handed is a breeze; my 4 year old daughter wouldn’t be overwhelmed by the task. The Olympus has just enough heft to feel good in the hand however, it won’t be subject to excessive shakiness due to being too light! The other thing that is hard to grasp from this size comparison picture is the sheer size difference of the lenses, that is the most amazing thing; check this image: 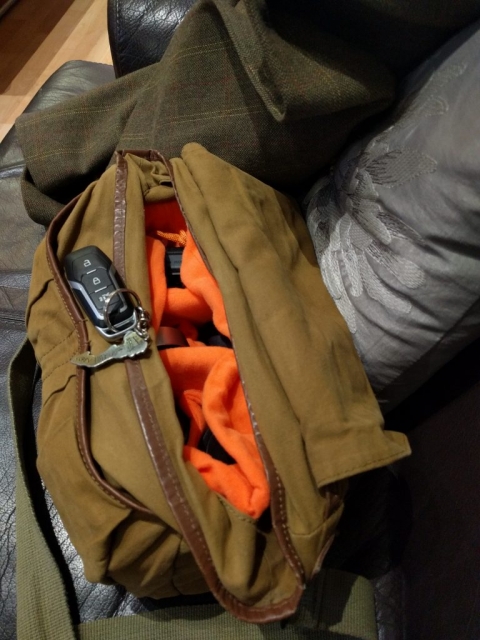 This is my casual messenger bag, from Debenhams, not a photo supplier. My car key fob is shown for scale; it isn’t particularly large. The orange liner is simply a generic camera bag liner for round about £10 UK. I had my Olympus EM-10 mk2, 3 prime lenses (34 mm, 50mm and 90mm equivalent), a 70-300 zoom equivalent and a 28-84mm zoom equivalent (kit lens). Additionally a wide angle adapter for the kit lens. I had removed my chromebook from the bag at this point! The lenses are so tiny, that my casual shoulder bag becomes a full camera system carrier. The compactness is amazing to me. In terms of size, the micro four thirds system is all about compact lenses. The equivalent to this little bag-full with my Canon 7D or 5D is a full camera backpack; I love this. The best of this system is that I can lift the whole thing out and put it in a rucksack if I’m going walking. One prime lens with a wide/normal view on the body, and this is a pocketable walk about camera of real image quality: 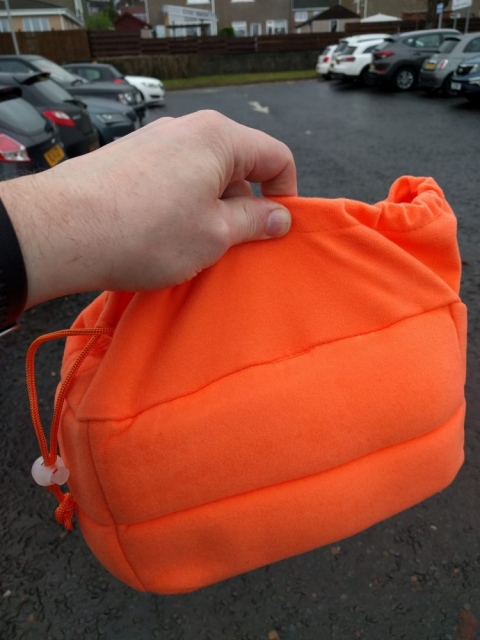 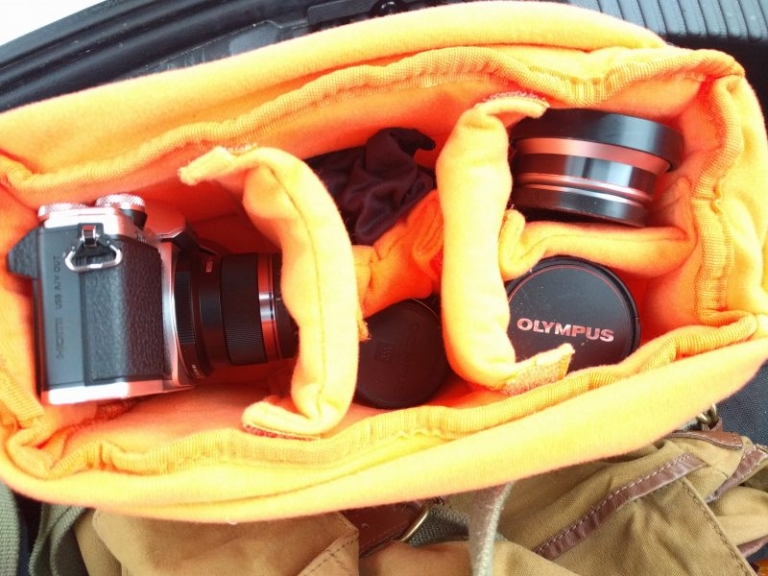 Now let’s move onto image quality. I am not running an analysis site, so I won’t be giving any scientific details, much as I would love to be doing that stuff for a living; I will just be giving my opinion based on approximately 8 months of use. The image quality is very good indeed, more than good enough for most uses. I am not going to pretend that it matches my APS-C sensor Canon 7D, or the APS-C “sensored” Canon 100D which it replaces in my armoury, because they actually do take a more detailed and more 3-D image with a prime lens, but the difference is not vast. here is the difference: in good light, there is no significant image quality difference, but in poor light, the micro-four-thirds sensor doesn’t keep up with the APS-C or full frame. In practice, keep it under ISO 3200 and all will be similar. In general use, the image quality is lovely. The micro-four-thirds sensor is a well planned sweet-spot in size by Olympus and Panasonic and it shows in practice; images are are detailed, 3-d in quality and have a magical quality. The 16 million pixels are good pixels and streets ahead of any compact. I can easily live with this camera as my main camera for day to day use and that is saying something!

When I took this camera to Dubai, I took the kit zoom, the 40-150 basic telephoto zoom, and a single prime. (25mm f1.8 50mm-equivalent) I also had the clip on wide angle adapter that fits the kit lens. The following holiday pictures are all an illustration of what the camera does.

For low light, the Canon DSLRs still have a significant edge, but that is the only situation that their advantage tells.  This may seem an odd statement, but it is true and easily explained. Once the sensor size is “large enough” and the image quality is good enough, then it all comes down to lens quality. I am a fan of prime lenses for my portrait work, as they give the most magical qualities of shallow depth of field (DOF) which of course creates the magical look that we associate with quality cameras. My Full frame Canon 5D MK2 can achieve this with an f2.8 zoom which is great for wedding work. My APS-C (cropped sensor) 7D can achieve it with an f.1.8 prime, even from 28mm focal length! My Olympus can get this effect with an f1.8 25 mm. Even with an f1.8 17mm, much of that shallow depth of field is present. The thing is, that My Canon 7D with my fastest glass, the 50mm f1.4 might give a more extreme and magical shallow DOF, but it can’t be used in most work. If I try to take a portrait with a subject, and focus on one eye, they turn around by only a few degrees, their other eye is blurred, so I generally use it at f2.8 minimum aperture for portraits. My Olympus f1.8 25mm, I can throw wide open and it still gives magical results, but it isn’t so unforgiving. The sweet-spot works here; as long as you use nice prime lenses, the Olympus OM-D 10 MK2 is magical, and much easier to use in practice. Here is another thing, which was regularly discussed on the “all about the gear” photo podcast, micro-four-thirds lenses, being smaller, seem to be easier to make across the diameter of the glass, and so all of the lenses, pretty much without exception are sharp and lovely right across the frame, even wide open. So here is the summary: a micro-four-thirds camera, with a decent prime lens, and light that isn’t candle-dim or night-time unlit-street-scene dark, is going to give results that are just as magical as any system camera in practice with such ease of carrying, that you will get shots that you just wouldn’t otherwise always get.

Note: I fell foul of the high ISO weakness in my week in Dubai this spring. I was only getting to know the camera, and generally was very happy with the results I was getting, but one evening was in the “Harbour Area” and didn’t notice that in the darkness the camera had chosen an extremely high auto ISO setting that was simply way too high for the sensor’s capability. I took a few pictures of my little daughter and my brother which were just a mess of noise as Mr\Mrs Olympus chose ISO 25600! I have had to work for an hour on a couple of these just to get a decent snap, but why the camera allowed it by default is a mystery to me; my Canon 5D (full frame) isn’t a brilliant performer in this stratospheric sensitivity region. I have subsequently set the limit in the camera to 3200 and might manually try 6400 if the shot seems worth the effort, but beware of this if you have just bought a micro-four-thirds machine.

This one was at ISO 25600, a sensitivity I would never have deliberately chosen; it is a noisefest, however that was a crazy setting! 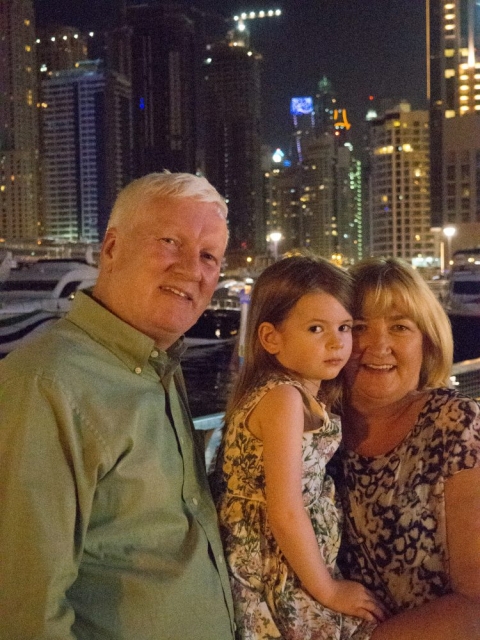 Here it is after a little bit of work to reduce the visible noise and “rescue” the image as much as possible: 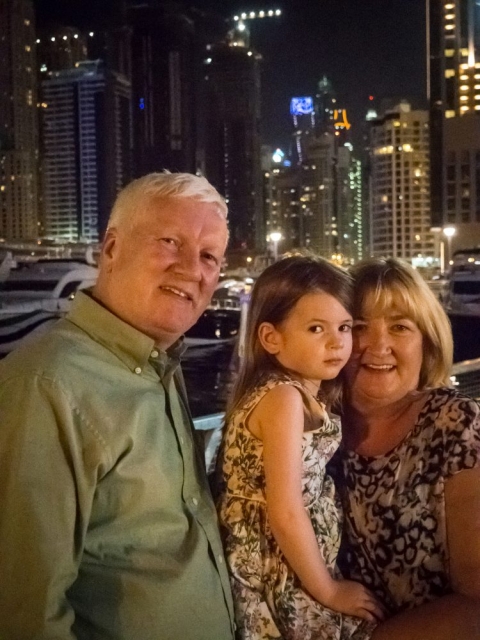 Features are the next thing to comment on. Let’s be clear from the outset, we are talking about the differences between great and awesome when we compare modern digital cameras, they are all amazing and have features that make our lives so easy. There are still differences that are worthy of comment.

The final thing is feel. I have read a few reviews that have majored on that unquantifiable quality that some cameras possess to make you want to pick them up. I have handled a lot of cameras, and I have always come back to my Canon DSLRs as the camera that has the best feel in use; that is essentially the camera that gets used most because it is the camera that I “feel” that I want to pick up. This camera has finally overtaken my Canon DSLRs. It has image quality that falls a tiny (inconsequential) bit short of my Canons, but the “feel” of the camera in my hand is a few times better for me; I want…want…want to use the Olympus for everything. It is a viscerally lovely thing to hold in my hands. It is undeniably a bit retro looking, but not to a fault, every control falls to hand nicely and it is designed to be so. Pick this up at your peril, you really won’t want to stop shooting with it.

I said finally, but there is something too about build quality. When in Dubai, having never dropped a Canon camera in my memory, something awful happened. I was in a town square, watching the “dancing waters” fountains, when I suddenly reached out across the dining table to catch my daughter’s falling glass. Imagine my horror to watch my camera, now knocked over by my over zealous lunge, head for the ground like gravity’s number one fan! It had only a cheap (eBay), lower half leather “ever ready” case on for protection. It hit my knee and then landed on the concrete paving slabs below. I still remember the vivid feeling of sickening certainty that my camera, a week or so old, was dead as I rescued it from the ground. My Sister in Law’s sympathetic and horrified facial expression as she saw it dive south told me that it wasn’t just me….I had killed my now beloved new camera, except…It seemed I hadn’t. I couldn’t find a mark, and that was true of the ever-ready lower case too; I still haven’t found the mark? The camera proceeded to work perfectly too for the rest of the holiday. As if this isn’t bad enough, having never previously dropped any camera, a few days later, the same camera, was seated on the back seat of my brother’s vast four wheel drive BMW and had obviously worked its way across to the door opposite my daughter’s child seat. Upon disembarking, I opened that door, only to watch my homesick-halibut camera tumble again to the pavement. My heart sank, I felt sick, having avoided my deserved fate as a camera abuser until now, I was certain that my just-desserts had arrived for the obligatory munching…except…again, no marks, no scrapes, no functional issues, and I went on to take more and more favourite images with this workhorse of optical excellence. What I am trying to get across to you is that the phrase “solidly built” barely does justice to this stalwart of the  photographic world. It feels great, it looks, great, it takes great images, it is great fun to play with and I am in love with it. I am in bed and my proposal has been received. I feel sure that this is the one. 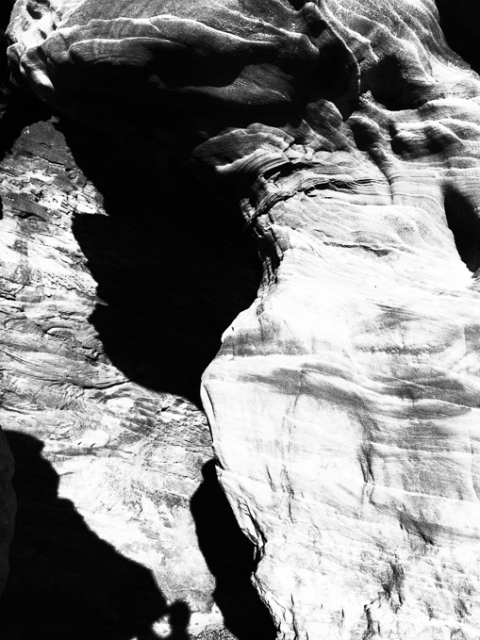 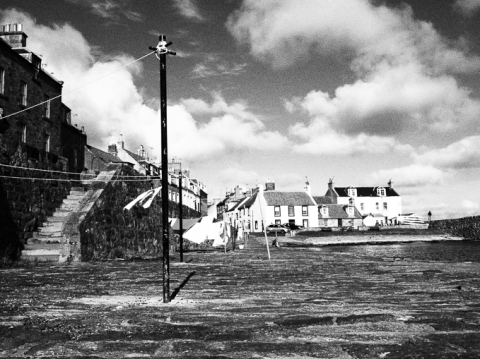 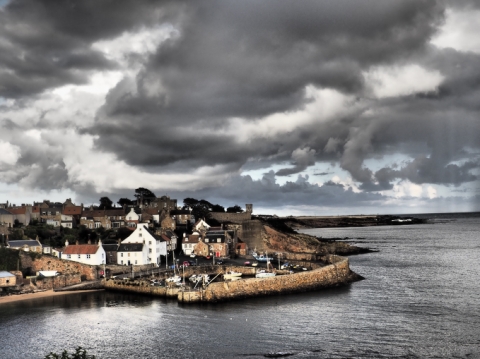 These were processed in Lightroom: 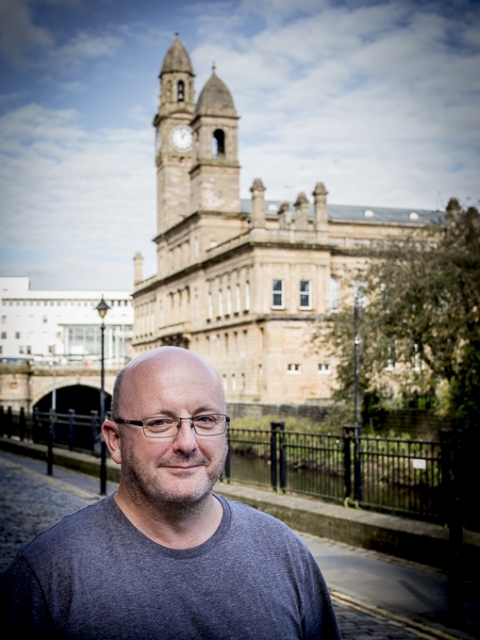 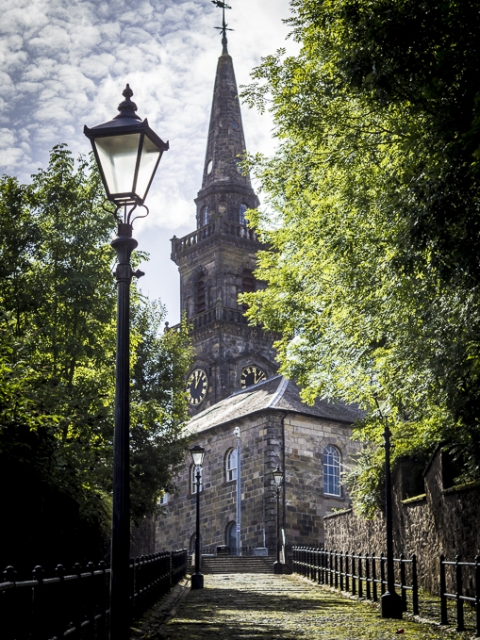 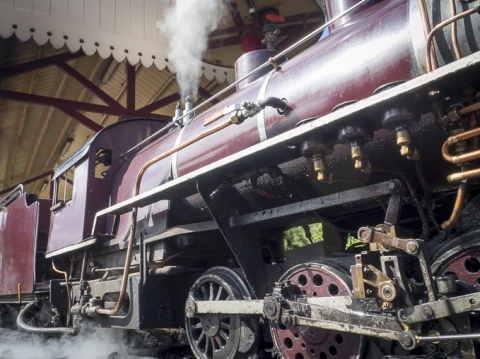 I’m happy with micro four thirds, I think you should include it in your options if looking for a carry around, quality camera. Thanks for looking.